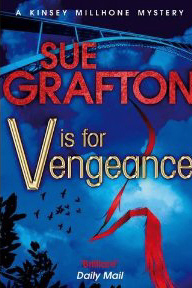 PI Kinsey Millhone is shopping in the lingerie department in Santa Teresa, when she sees a woman shop-lifting.  Kinsey informs the saleslady, and she in turn calls security.  When the woman is apprehended and Kinsey later learns that she is being charged, Kinsey is pleased with a job well done, although she had been aware that the woman was not working alone and her accomplice has got free and clear.

However, when Kinsey learns a few days later that the woman jumped off a bridge she is troubled by such an extreme action for a shoplifting offence.  When she is later contacted by the woman’s fiancé she agrees to do some investigation.

Meanwhile her neighbour 88 year-old Henry, a retired baker is called away to Detroit following a fall by his 99 year-old sister Nell.  In edition to his elder sister Nell, Henry has three brothers Lewis, Charles and William, the latter just a year older than Henry who had relocated to Santa Teresa when he married Rosie who runs a tavern in the locality, serves bad wine and weird Hungarian food.  I admit to enjoying the exploits of Henry’s aged family, being not exactly in the first flush of youth it’s good to hear of octogenarians living full and happy lives.

The story is rich in well-fleshed out characters, a young man borrowing money from a loan shark, a rich woman who discovers her husband is being unfaithful, and Detective Len Priddy who knew Kinsey’s late husband and is no fan of Kinsey’s.  These people initially seem to be unconnected to each other, but as the story progresses these unlikely strands are woven together.

I was a great fan of this series set in the 1980’s but had somehow missed the last few books, something I must remedy as I so enjoyed this entry in the series, which like all good mysteries has a surprising twist at the end.  Highly recommended.
-----
Lizzie Hayes

Sue Taylor Grafton born April 24, 1940 is best known as the author of the 'alphabet’ series featuring private investigator Kinsey Millhone in the fictitional town of Santa Teresa, California. The daughter of novelist C W Grafton, she has said the strongest influence on her novels is the author Ross MacDonald. . Prior to success with this series, she wrote screenplays for television movies.  She lives in Montecito, California and Louisville Kentucky.  She freely admits that Kinsey Millhone is her alter ego.  In 2008 she was awarded the Cartier Diamond Dagger for sustained excellence in the genre of crime writing by the Crime Writers association.