‘Property of a Lady’ by Sarah Rayne 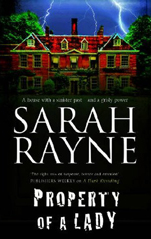 When Jack and Liz Harper learn that they have inherited a house in Marston Lacy in Shropshire, Jack is all for selling it unseen, as living in Maryland USA there is little chance of their being able to inspect it, but Liz is eager to learn all about the house, and the English ancestors she never knew she had.    As a compromise Jack emails his friend Michael Flint, and asks him if he will leave Oxford and pop up to Shropshire to have a look at the place, and send him some photographs.

So, the coming weekend Michael books himself into the local pub in Marston Lacy. Meanwhile not one to let the grass grow under her feet, Liz has contacted a local antiques dealer to see if she can track down any of the house’s original furniture, and Michael now has an extra chore to look up antique dealer Nell West who lives in Marston Lacy, and has located a nineteenth century long-case clock reputed to have been the property of a lady who lived at the house.

Armed with his camera Michael visits Charect House which has stood empty for more than a century and has a sinister reputation.  While he is taking photos of various aspects of the house for Jack, Michael is conscious of a ticking clock but cannot actually locate the clock.  Later Michael meets Nell West and her young daughter Beth, who is close in age to Ellie, Jack and Liz Harper’s daughter.  It is Beth who hears the ‘Dead Man’s Knock' - has she become the catalyst to awaken the evil in Charect House?

Utterly fascinating, the past history of Charect House is slowly revealed through some old diaries discovered during the house renovations and through another unexpected source.  But while there are still secrets hidden in Charect House how close is tragedy.

Not a book to read alone late a night, creepy and at times terrifying, Sarah Rayne weaves an intriguing tale with a chilling twist at the end. Highly recommended.
----
Reviewer: Lizzie Hayes 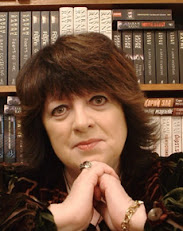 Sarah Rayne began writing in her teens, and after a Convent education, which included writing plays for the Lower Third to perform, embarked on a variety of jobs. Her first novel was published in 1982, and since then she has written more than 20 books, including eight psychological thrillers, which have met with considerable acclaim, including the nomination to the long-list for the prestigious Theakston’s Crime Novel of the Year 2005 for Tower of Silence, (originally published in 2003). In 2011, she embarked on a series of books with a ghost-theme, featuring the antique dealer, Nell West, and the Oxford don, Michael Flint, who first make their appearance in Property of a Lady.