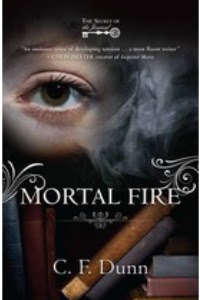 Emma D'Eresby, a 29 year-old Professor of History at Cambridge college grasps the opportunity of a post in an exclusive university in Maine, USA.  Here she hopes to learn more about a curious 17th-century journal in the College library.  On the evening of her formal reception she meets the many distinguished academic and research staff at Howards Lake College, among which are the sinister Professor Kort Staahl and the enigmatic 33-year-old surgeon, Matthew Lynes, who she later learns is a widower.  And from that early introduction a sense of tension and menace is tangible.

As Emma eases herself into life in the college - her students and the companionship of Elena Smalova and her boyfriend Matias, she continues to seek to indulge her interest in the 17th century journal about which her grandfather often talked,  and which had sparked her curiosity.  She runs into Matthew Lynes on several occasions enjoying a lively exchange of views, which doesn’t please Sam Wiesner who is attracted to her.

Emma is clearly attracted to Matthew, however this is not a straight forward romantic thriller, as Emma discovers as she draws closer to Matthew.  A physical attack on Emma brings things to a head, as well as bringing her family from England to Maine.

Whilst Mortal Fire, resolves some questions, in the main it whets ones appetite for the second book in the series of the Secret of the Journal.

Like all good mystery thrillers it has a stunning twist at the end that has one eager for the next book in the series.
------
Lizzie Hayes

C F Dunn says that although she was always on the move with her Air Force family, she spent a peripatetic but happy childhood in her book-lined imagination fuelled by tales from the past.  University gave her the opportunity to indulge her love of history and it was where she met her future husband.
Now she divides her time between running a specialist dyslexia and autism school in the South-East, and writing in the South-West, best described as living between the here and now and the never-never.