‘Death Lies Beneath’ by Pauline Rowson 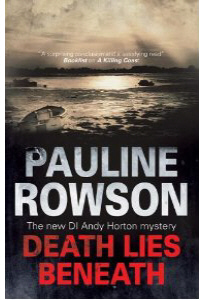 Having no luck in finding the killer of ex-con Daryl Woodley, both Detective Superintendent Uckfield and Detective Inspector Andy Horton attend Woodley’s funeral in the hope of picking up a lead to further the investigation.  But their attendance at the funeral leads them in an unexpected  direction.

Then a body found on an old boat in Tipner Boatyard further complicates an already perplexing mystery.  To add to Andy’s confusion Chief Superintendent Sawyer thinks the case is connected to a European criminal gang and assigns Agent Eames from Europol to assist him.  Agent Eames is cool, blonde and gorgeous.

There are many twists as the investigation progresses. It seems that everyone that they put in the frame for the murders they find is already serving time.  Probing deeper into the lives of those connected with the victims the team uncover secrets in the past that lead them to another unsolved murder.

As the story progressed it was clear that there is an unsolved mystery in Andy Horton’s past and one that until recently he has not attempted to solve but one he has now started to wonder about, and contact with a dying man has set him to do some private investigating.  But maybe danger lurks in seeking out the truth of his past.

This is a fast paced excellent mystery, with an interesting diverse set of characters, and an intriguing hook at the end that has me eagerly awaiting the next instalment in this series.Highly recommended.
------
Reviewer: Lizzie Hayes

Pauline Rowson  was born and raised in Portsmouth. Pauline draws her inspiration for her crime novels from the area in which she lives, which is diverse and never without incident. Before becoming a full time writer Pauline was a renowned marketing and training guru, with a collection of 'how to' business books and a successful marketing, media and training company behind her which she ran for over fifteen years working with a number of clients in the professional, charity and business to business sectors. When she isn't writing (which isn't often) she can be found walking the coastal paths on the Isle of Wight and around Langstone and Chichester Harbours.  She is the founder of CSI Portsmouth an annual event part of Portsmouth Bookfest and a committee member of the Crime Writers' Association.