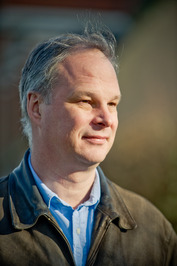 Michael Ridpath is the author of eleven books.  Born in Devon, he grew up in Yorkshire and was educated in Somerset and Merton College Oxford. His early career was as a credit analysist and later a bond trader , subsequently he joined a venture capital firm.  During this latter period he wrote his first novel Free to Trade. After publication of this first book he went on to write seven further thrillers set in the world of business and finance, but his last three books have been set in Iceland, and I wanted to ask Michael what prompted this change in direction.

Q         Michael, you have just published Meltwater, the third book in your Icelandic series featuring Magnus Jonson. What prompted you to set your books in Iceland?
A         When I decided to write a crime series, I realised that my detective would have to be distinctive.  I could have given him a peg leg, an eye patch and a parrot, but I decided rather than that I would have him live in a foreign country.  A strange country.  A distinctive country.

I had visited Iceland in 1995 on a book tour and found it an extraordinary and exhilarating place.  I decided then that one day I would like to set a book there.  So Iceland was the first country that popped into my head, unanalysed.  I tend to overanalyse things, so I spent the next month trying to think of somewhere else, but Iceland was always my favourite, even though I knew very little about the country.  So I spent another month researching the country, its society, its history, its people and its literature, and I was fascinated.  Four years on, I still am, fortunately.

Q         I have read references to Magnus Jonson being ‘an honest cop in a corrupt society.’ Where did Magnus Jonson come from?  Is he purely from your imagination?
A         Magnus did come from my imagination, but he didn’t spring from there whole.  Having decided I wanted to write about a cop in Iceland, I then had a problem.  I am not Icelandic, and I don’t speak the language.  Also I wanted to write about what I as an outsider find extraordinary about Iceland, much of which would seem unremarkable to a native.  Yet my cop had to speak the local language or he wouldn’t have much of a clue about what is going on.

So I came up with Magnus.  He was born in Iceland, and hence speaks Icelandic, but followed his father to America when he was twelve.  After his father was murdered, Magnus decided to become a policeman.  Twelve years later, he is a homicide detective in Boston when he is asked to transfer to Reykjavík on secondment.  This all sounds a bit complicated, but it made Magnus real, at least to me.  And that’s a good place to start.

Q         The sagas play quite a part in the stories. Have you read many of the sagas? And as I realise many of them are 1000 years old have you seen any of them in their original form?
A        I love the sagas.  I have read eight of them so far.  They have a very modern feel: the characters are deftly developed and the plots are great.  I would say that they are as good as modern thrillers, except that you get the odd baggy bits of repetition, and it's a bit difficult to keep track of exactly who is who.  I usually enjoy them more on the second reading.  Njals Saga is my favourite, followed by the Saga of the People of Eyri.  The Greenland Saga and the Saga of Erik the Red are fascinating since they describe the discovery of America 1,000 years ago.  Definitely a book in that.

I have seen the sagas in their original form.  They are on display in the Cutural Institute on Hverfisgata in Central Reykjavik.  I would highly recommend a visit: the exhibition doesn't take long to see, but is very memorable.

Q.        Did Meltwater change during the writing process, or did it pan out exactly as originally planned?
A.        Meltwater panned out more or less as I had planned it.  I spend 3-4 months planning and researching before I start writing, so I had a pretty good idea of how things were going.  I often pause about a quarter of the way through to see how the characters and the plot are developing, and I made some changes then.  But those changes, if anything, brought the book closer to how I originally envisioned it.

Q         This new series is a far cry from your books with a money trading background. It is frequently said: ‘write what you know’.  What prompted you to make this move from a money trader hero to a policeman?
A.        I think ‘write what you know’ is excellent advice for your first novel, and of course many authors continue to write what they know throughout their career.  But as I changed and the financial world changed, I found I knew less about it.  More importantly, I liked the idea of writing about what I didn’t know about.  And indeed it has been enormously stimulating to try to find out as much as I can about a brand new country, brand new at least to me.

Q         Although your early books were standalone thrillers set in the world of business, the last two before the Icelandic series featured Alex Calder, a money trader who just wants to fly planes.  Alex is a marvellous, well-fleshed out character.  Was it difficult to drop him and try something completely new? And are we likely to see Alex again?  Personally, I hope so!
A.        I liked Alex Calder too.  The problem is, I really don’t like his world, the world of banking, any more.  I might get over that and write about him again one day.  If I do it will because I suddenly see a way of doing it that interests me.

Q         From what I understand money trading is a very lucrative business – though maybe not as much as it used to beJ. What prompted this move from money trading to writing?  Have you always just wanted to write?
A.        I always admired writers, but assumed I wasn’t good enough to be one.  I was surprised and gratified to discover that I could write thrillers.  I actually enjoyed working in the City in my twenties.  Trading bonds, trying to outwit the market, was fun.  But managing departments of prima donnas didn’t look fun.  I suppose I am saying I’m glad I did it, but I’m also glad I’m not doing it now.

Q         Do you have a regular working day?
A.        I do.  Discipline is obviously important for anyone who is planning to type a hundred thousand words twice.  I always keep the morning free and write a minimum of 1,000 words and a maximum of 2,500.  That way a book will eventually get written.  A routine is good; otherwise you constantly have to decide, ‘shall I write today?’, and give other people a vote.

Q         What's your favourite part of the writing process?
A         I like every part.  Indeed the cycle of research, planning, writing, rewriting, copyediting and publicising, means that just as I am getting fed up of one aspect of the process, there is something else to move on to.  It is wonderful after correcting hyphenation in one book, to move on to a blank sheet of paper for the next.

Q         Are you in anyway influenced by other writers?  Who are your favourite authors?
A         I used to be heavily influenced by Dick Francis, but that’s less true now.  When I read thrillers or crime novels, I try to work out what the writer is doing really well.  For example, I have just read a book by Aline Templeton where she developed half a dozen fascinating and complex characters, and deftly revealed them bit by bit as the book progressed.  That has influenced the way I am writing the book I am working on now.

Q         As you know I am keen to promote new writers, so have you any golden tips for them?
A         Rewrite.  It is by rewriting that you learn.  And in order to be published, a first time novel must not just have promise, it must fulfil that promise, so it needs to be polished.         Also make the first scene the best scene.

Q         How long did it take you to get published?
A         I was very lucky.  I sent the manuscript of my first novel, Free To Trade, to pairs of agents.  The second name on my list, Carole Blake, invited me round for a cup of tea, and asked me if she could represent me.  I thought it over for two or three seconds and said ‘yes’.  She was brilliant.

Q         I have to admit that reading the book I struggle to get my tongue around some of the names and places.  Do you speak Icelandic?
A         I keep trying.  In the research phase of every book I write, I do half an hour’s Icelandic every day.  It’s a really hard language: the grammar is similar to Latin, but more difficult.  But there are some lovely phrases.  For example “Hvalreki” means “Beached Whale!” which is what you cry if you have just had a stroke of luck.  What could be luckier than to wake up and find a whale beached on the shore outside your house?

Thanks, Michael, for taking the time to share with us the background to your new series.
Posted by Lizzie at 20:55