‘The Sin Eater’ by Sarah Rayne 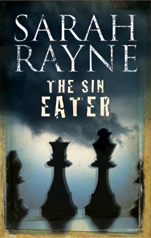 
When Benedict Doyle reaches twenty-one he inherits his great-grandfather’s house Holly Lodge in north London.  A house he once overheard his father saying he should never enter.  Shortly afterwards both his parents and his grandfather were killed in a car crash.  Benedict had last entered the house as an eight-year-old boy, following the funeral of his parents, and had seen images of his great-grandfather’s in a mirror, which still haunts him.

The story begins on the west coast of Ireland in Kilglenn in the 1890’s when Declan Doyle and his friend Colm Rourke decided that they want to leave Kilglenn and take with them Colm’s cousin Romilly, the most beautiful girl either of the boys had ever seen. But first they would get inside the watchtower where Father Sheehan lived as a hermit. The talk in Fintan’s bar being that Nick Sheehan had met the devil one morning walking on the cliffs and traded his soul for a chess set. A chess set that is so evil it’d frizzle your soul.

Deciding on a house clearance prior to selling the house Benedict contacts Nell West, an antique dealer, a friend of  his cousin Nina with whom his has grown up,  to value the contents.  So Nell agrees to meet Benedict at the house on the 18th December to make an inventory of the contents.

Holly Lodge is an eerie property unlived in for decades.  Haunted by a malevolent presence it holds a troubled and violent past which is revealed through a series of flashbacks to Benedict, who eventually contacts Dr Michael Flint, as he explains, that he thinks that he might have a personality disorder as he is constantly having visions of people living in another time.

But maybe the evil in Holly House is not only concerned with Benedict Doyle – could it’s malevolence now be reaching out to the present, and to what and to whom will it spread its evil.

A chilling tale of murder, that has you too scared to move for fear that something will be there just outside your peripheral vision, waiting for you.  Don’t read it alone at night - be warned.

And if the story of Declan and Colm wasn’t eerie enough, there is a final twist that turns everything on its head. Highly recommended.
-----
Reviewer: Lizzie Hayes. 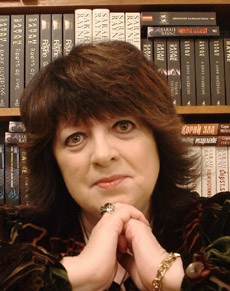 Sarah Rayne began writing in her teens, and after a Convent education, which included writing plays for the Lower Third to perform, embarked on a variety of jobs. Her first novel was published in 1982, and since then she has written more than 20 books, including eight psychological thrillers, which have met with considerable acclaim, including the nomination to the long-list for the prestigious Theakston’s Crime Novel of the Year 2005 for Tower of Silence, (originally published in 2003). In 2011, she embarked on a series of books with a ghost-theme, featuring the antique dealer, Nell West, and the Oxford don, Michael Flint, who first make their appearance in Property of a Lady.
Posted by Lizzie at 13:50