‘Dead and Buried’ by Stephen Booth 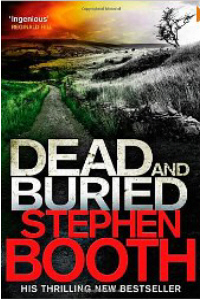 The twelfth entry in the series featuring Ben Cooper now a Sergeant,  and DS Diane Fry brings starkly to our attention the effects of fire in the Peak District in Derbyshire.

Situated in an isolated area is an abandoned pub -The Light House, which has been empty for the past two years.  Following the report by one of the fire fighters of a break-in at the abandoned pub Cooper decides to investigate.  But a call reporting the discovery of a buried rucksack with a leather wallet drives the abandoned pub from Cooper’s mind.  Could this buried find be a lead to the mystery of the disappearance of two tourists who two years ago, just vanished.  And despite exhaustive searches of the area not a sign of them has ever been found.

The subsequent discovery of a body in the abandoned pub has Cooper kicking himself for not carrying out a search of the pub himself. That DS Fry, who is now assigned to the East Midlands Special Operations Unit, was the one to make the discovery rankles with Cooper. Diane Fry is always hopeful that she has shaken off the mud and lambs of the Peak District, but something always seems to drag her back.

So the dormant case is now a priority.  Could the body found in the abandoned pub be linked to the disappearances of David and Trisha Pearson?  DS Ben Cooper and DC Carol Villiers whom Ben has known from school investigate.  Also on the team is DC Gavin Murfin. As his retirement approaches we learn  more of Gavin Murfin and I found the insight strangely moving.

Cooper is due to marry Liz Petty, a crime scene operative.  It seems that the only topic of conversation Liz has is wedding plans, and it is clear that it is at times getting on Cooper’s nerves. Although, as Cooper muses it’s her special day and he loves her so much that he wants her to have that day.

This is a mystery that keeps the reader guessing all through the book - just what did happen to the Pearsons?   But the climax is stunningly unexpected, and leaves the reader reeling. Do not miss this entry in this highly acclaimed series.  Highly recommended.
------
Reviewer: Lizzie Hayes