‘Flesh and Blood’ by Mark Peterson 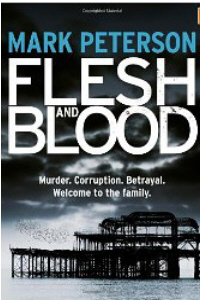 When ambitious twenty-seven year old DS Minter joins the crime squad at Kemptown Station in Brighton, it rapidly becomes clear that he is not welcomed by his new boss DCI Tom Beckett.  Having previously worked for Chief Superintendent Roberts compiling statistical reports Minter is viewed with suspicion.

The killing of an undercover policeman resulting in a fiasco for the squad’s biggest case to bring down drug dealer Alan Day, seriously effects morale.  Soon it becomes clear to Minter that there is something seriously wrong in the squad.  And he quickly realises that he will have to make a choice, on just whose side he is on.

Written from multiple points of view this is a powerful debut.   Much of its strength lies in the characterisation, as we encounter family issues with all the main characters. Whilst Minter is the main voice, Tom Beckett’s struggles make him a sympathetic character although that is not of course apparent to Minter, who just sees an older cop, who as far as he is concerned is losing it.

There is torture and violence which is shocking, and at times stomach turning, but adds to the picture of both modern day criminals and policing.   Starkly realistic, this book is highly recommended by this reviewer.
------
Lizzie Hayes

Mark Peterson worked in PR and teaching before starting his writing career. He lives in Brighton with his wife and two children.
Posted by Lizzie at 15:19