‘Nothing but Trouble’ by Roberta Kray 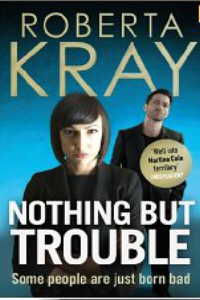 Harry Lind and his partner Mac, both ex-cops have relocated their PI business from the West End to Kellston in the East End of London, where rents are cheaper.  Before the offices are officially open for business Harry gets a visit from investigative journalist Jess Vaughan – someone he hasn’t seen for a number of years.  Jess tells him that her friend Sam was one of the five girls involved in an incident fourteen years ago, when Minnie Bright was killed.  Donald Peck was convicted of the crime and went to prison where he later hanged himself.  Jess was interested in doing a piece on the effects of crime on those, as it were, left behind.   Although one of the girls is now dead, the others had initially been keen to be part of the story, but now they have pulled out, and Sam has had her tyres slashed and received anonymous death threats.  Harry is sceptical, he had worked on the original case and can envisage no reason why anyone would be concerned about a story on the case, but agrees reluctantly to speak with Sam. Meanwhile he has another ‘paying’ client – a man wants his wife watched.

The story is multi-layered, as Harry gets drawn into both the death of 10-year-old Minnie Bright following a related murder, and the beautiful Aimee Locke, a possible cheating wife.

Rich in characters - Harry Lind and his ex-wife DI Valerie Lind, who while divorced don’t seem to have actually severed the ties that binds, Jessica Vaughan, who is in a relationship with Neil, but how deep does it go?  The fall-out from that fateful day fourteen years ago, which has left its mark on all the girls for different reasons.  I could not put this book down and although it is 470 pages, I read it in one sitting.  There was no way I could go and do something else until I knew the outcome.

Utterly gripping the story moves at a cracking pace.  The story is told from multiple points of view, and as the layers of deceit are stripped away the truth eventually surfaces with many surprises, and heart in the mouth, edge of your seat situations. This book is highly recommended.
-----
Lizzie Hayes
Other books are The Debt, The Pact, The Lost, Strong Women, Villain’s Daughter, Broken Home.

Roberta Kray was born in Southport. She worked in publishing and media research in London for fifteen years.  In early 1996 she met Reggie Kray and they married the following year; they were together until his death in 2000. Through her marriage to Reggie, Roberta has a unique insight into the world of the London gangland. She lives in Norfolk.