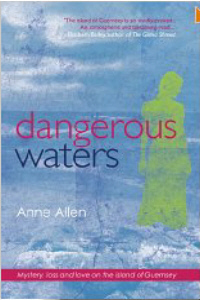 As indicated on the cover this is a story of mystery, loss and love set on the island of Guernsey. Jeanne Le Page returns to Guernsey after fifteen years in England to receive her inheritance after her grandmother‘s death. Jeanne has had some major tragedy in her life but this return both opens out the chance of a new life and suggests solutions to some mysteries.

Those who, like me, read the stories by E. M. Brent-Dyer set in Guernsey from the 1930s to the 1940s will enjoy a return to the familiar names and places but showing the changes made by the 21st century. This is an enjoyable story with an appealing heroine who fights her way through problems relating to her past and to that of her grandmother. As Jeanne must decide whether to sell the cottage bequeathed to her by her grandmother she finds herself remembering her youth in Guernsey and the indomitable character of her grandmother. The Second World War history of the island becomes a fascinating part of the tale. Eventually after some shocking revelations all is explained most satisfactorily.
-------------
Reviewer: Jennifer S. Palmer
This is Anne Allen’s first novel.

Anne Allen lives by the sea in Devon and has three children - two boys and a girl - and two small grandchildren.  After moving around a lot fell in love with the island of Guernsey. The inspiration to write Dangerous Waters came after reading a book by Joanne Harris - Coastliners - about another small island off the coast of France. My experience as a psychotherapist helped me enormously. Currently Anne is writing Finding Mother, set primarily in Guernsey but with excursions to England, Jersey and Spain.

Jennifer S. Palmer.  Throughout my reading life crime fiction has been a constant interest; I really enjoyed my 15 years as an expatriate in the Far East, the Netherlands & the USA but occasionally the solace of closing my door to the outside world and sitting reading was highly therapeutic. I now lecture to adults on historical topics including Famous Historical Mysteries.