‘The Piccadilly Plot’ by Susanna Gregory 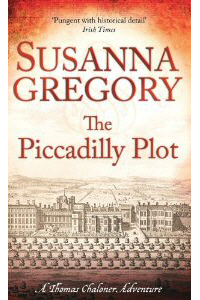 Thomas Chaloner is pleased when he is summoned back to London, having been away investigating corruption on behalf of his master the Earl of Clarendon.  However, he is less pleased when he discovers that his new assignment is to find the culprits who are stealing bricks from the site of his master’s unfinished sumptuous new residence, Clarence House, north of Piccadilly.

Whilst Chaloner is no stranger to intrigue at court, he is perturbed by evidence produced by Hyde, the Earl’s son of an assassination threat which puts Queen Katherine firmly in the frame.  Chaloner protests that the Queen has barely mastered the language let alone find or converse with those capable of carrying out such a plan.   But his protestations fall on deaf ears with the exception of Frances, the Earls wife who Chaloner finds to be a woman of excellent sense.

Not only is Chaloner sorely beset with work issues, but all is not well at home with his new wife Hannah who has engaged a number of servants, Chaloner neither wants, or having met them, trusts.  Luckily he’s got a bolt hole – sensible chap.

As Chaloner sets to uncover the perpetrator of the threatened assassination, he finds links to other misdeeds, and coupled with the terrific sense of period that Susanna Gregory portrays, this is an intriguing and fascinating book.
------
Lizzie Hayes 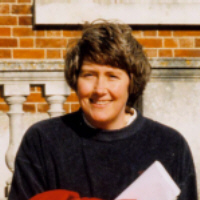 Susanna Gregory is the pseudonym of Elizabeth Cruwys, a Cambridge academic who was previously a coroner's officer. She writes, and is noted for her series of mediaeval mysteries featuring Matthew Bartholomew, a teacher of medicine and investigator of murders in 14th-century Cambridge. The first in the series, A Plague on Both Your Houses is set against the ravages of the Black Death and subsequent novels take much of their subject matter from the attempts of society to recover from this disaster.
Her second  series of books, set just after the Restoration of Charles 11 and featuring Thomas Chaloner, detective and former spy, began with A Conspiracy of Violence published in January 2006, and continued with The Body in the Thames, published in hardback edition January 2011