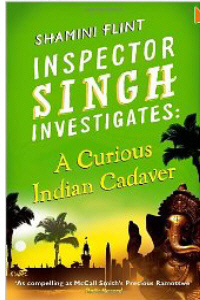 Inspector Singh of the Singapore Police Force is on medical leave, and whereas during his working life he has endeavoured to wangle a long lunch followed by an afternoon nap, being at home he has now exhausted this pleasure, and is keen to get back to work. However, his superior Superintendent Chen is enjoying the absence of his overweight and permanently dishevelled Inspector, despite Singh’s excellent record of catching murderers, and is adamant that Singh must adhere to the letter of his medical leave certificate.

To add to his home discomfort Mrs Singh is not only policing his smoking, but has discovered the Internet and relays to her husband everything she reads on it as fact, refusing to even consider that the information might not be true. When Mrs Singh  announces that they are to attend the wedding in Mumbai of her cousin’s daughter, he grudgingly agrees.  The description of Singh’s initiation into India culture had me rolling on the floor with laughter.  He deduces that the only upside will be spicy curries galore, that’s if he can avoid ‘Mumbai belly’ or ‘Delhi belly’ or ‘whichever part of India you happen to be’ belly!

The disappearance of Ashu, the beautiful bride-to-be has the family in a spin, Mrs Singh who spends her life constantly carping at her husband, proudly announces that he is the head of the Singapore police. Inspector Singh is not sure that Superintendent Chen has heard of his promotion, but he bears up splendidly. Employed by the bride’s grandfather Tara Singh, a wealthy influential man, Inspector Singh sets to work – did Ashu run away from an arranged marriage? Does she have a boyfriend? But everything he learns of Ashu is a picture of a strong woman. Further investigation uncovers a labyrinth of deceit.

This series is a total joy. The mysteries are complex and interesting, the characters are fascinating, and Inspector Singh is a larger-than-life character you so want to meet.  To those of you who haven’t had the pleasure of reading the earlier books in this series, don’t delay, just do it now.  I envy you the delight of reading these books for the first time. This entry in this marvellous series is highly recommended.
------
Lizzie
Earlier books, Inspector Singh investigates: A Most Peculiar Malaysian Murder, A BaliConspiracy  Most Foul, The Singapore School of Villainy, and A Deadly Cambodian Crime Spree

Shamini Flint lives in Singapore with her husband and two children. She began her career in law in Malaysia and also worked at an international law firm in Singapore. She travelled extensively around Asia for her work, before resigning to be a stay-at-home mum, writer, part-time lecturer and environmental activist, all in an effort to make up for her ‘evil’ past as a corporate lawyer! Shamini has sold over 500,000 books since she began writing six years ago.  There are five in the Inspector Singh series.
Posted by Lizzie at 14:41