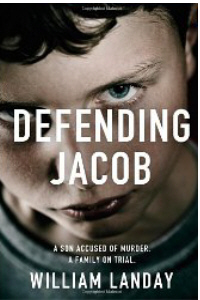 What would you do if your child was accused of murder?  You would defend that child to the death, right?  Of course you would.  You'd do anything, anything, even break the law yourself, if you felt it would help to establish his innocence.  But what if you began to have doubts, to wonder if in fact that child was guilty?

The main  premise of William Landay's haunting new book, Defending Jacob, rests on just such a dilemma. The book examines the life of Andy Barber, a long- term Assistant District Attorney, and his wife Laurie, who are living the suburban American Dream with their only child, Jacob, a withdrawn, incommunicative and sullen teenager – which makes him no different from most fifteen-year-old boys.

When one of his schoolmates is found dead in the woods with three knife wounds in his chest, suspicion falls almost immediately on Jacob.  The further the book develops, the more the evidence seems to point to him.  Andy, however, is convinced that a local paedophile is responsible and is prepared to go to any lengths to see that blame falls on him.  And I mean any lengths.  Which side of the law is he on?

When psychiatric evaluations of Jacob are ordered by the court, his parents begin to realise that their only child is not at all the boy they thought they knew.  To their joint shock, their son is revealed as a borderline psychopath.

Nonetheless, Andy says about the law, “there was no way in hell I was going to trust my son’s fate to it.”   He also says – and this is one of the strengths of this book: "Suspicion, once it started to corkscrew into my thoughts, made me experience everything twice: as a questing prosecutor and anxious father, one after the truth, the other terrified of it.”

This novel is much more than a straightforward thriller.  It examines the fragility of family life.  It shows us how we can never really know our children, however, much we think we do.  It poses a number of important questions about morals, ethics, parenthood and in particular, the law.  “Our blind trust in the system is the product of ignorance and magical thinking,” Andy states.

Landay also shows how easily lives can be destroyed by smoke, whether or not there is a fire.  Even if Jacob is acquitted, which looks increasingly doubtful, Andy Barber knows he can never again work as a DA, nor can the family ever return to its former happy lifestyle.  He watches his hitherto happy wife, the centre of her circle of friends, turn into a bedraggled and unkempt old woman.  Like her, he is horrified at the revelations first of Jacob's classmates, and secondly of the psychiatric evaluations.  Add to this mix a secret family history of murderous ancestors, and you have a hugely suspenseful story that leaves you turning to pages to find the outcome.  The twist at the end is completely unpredictable.
-------
Reviewer: Susan Moody

William Landay was born 1963, in  Boston Massachusetts.  Landay graduated from Yale University and Boston College law School.  Prior to becoming a writer, he served for eight years as an Assistant Distict Attorney.  His first novel, Mission Flats, was awarded the John Creasey Dagger (now called the New Blood Dagger) as the best debut crime novel of 2003 by the British Crime Writers Association.  He Lives in Boston.