‘The Devil’s Edge’ by Stephen Booth 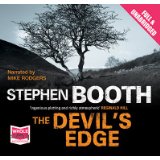 The eleventh in this series set in rural Derbyshire finds Ben Cooper now a sergeant and engaged to Liz.  DS Diane Fry is on a working group in Nottingham and not enjoying it.

A series of break-ins by a band of burglars who are merciless in their methods have been dubbed ‘The Savages’, by the press, but a break-in at the Barons home in the expensive village of Riddings is the worst yet, as this time they leave a body. Ben Cooper is called to investigate, along with Gavin Murfin who is sitting out his time to retirement, and whose jaded remarks I found rather amusing.  A new member to the team is DC Carol Villiers – an old friend of Ben’s from school.  As Ben conducts interviews with the residents of Riddings he meets a fair amount of hostility, maybe because of the secrets that he gradually unearths, but also because despite the affluence of the neighbourhood it is clearly not a happy one. The houses are large and each resident has carefully ensured privacy from their neighbour – friendly they are not.

An unexpected and terrifying incident for Ben brings Diane Fry back to take over the investigation.  She remarks that Ben has matured, and I wondered if they would at last find a meeting point, but she is still her prickly self, although I did sense mutual respect.

The descriptions of the moors and the stones is fascinating, it is clear that the author loves the area, and his knowledge of it is extensive, enabling him to convey to the reader the brooding atmosphere of The Devil’s Edge, despite it being high summer. Cleverly plotted, I was kept wondering right to the solution, and then surprised by the end of the book, I now just have to read the next, which I see is entitled Dead and Buried, and out soon.

Mike Rogers narration added much to my enjoyment of this book, he has it just right.
-----
Lizzie Hayes 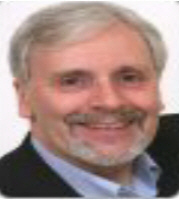 Mike Rodgers  is an actor and director. He has worked extensively with the English Shakespeare Company, including playing the title roles in Hamlet of Titus Andronicus.  He has appeared in several British soaps and continues to work in TV and films as well as audiobook narration.
Posted by Lizzie at 16:07