‘Malice in the Cotswolds’ by Rebecca Tope 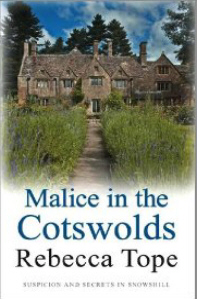 It is late summer when Thea Osborne house-sitter, accepts a two-week assignment at Hyacinth House in the village of Snowshill.  The owner of Hyacinth House is Yvonne Parker, a somewhat nervy lady, with an extremely cluttered house, who it appears is to visit her ex-husband in London in the hope of getting some money out of him for their daughter Belinda’s impending nuptials.  That Yvonne has had no contact at all with him since he quit the marital home some five years ago strikes an odd cord with Thea.

Once Thea has met the two cats she is to take care of, and Yvonne has taken her leave, Thea inspects her surroundings. Lovely garden - she hopes that the weather holds so that she and her spaniel Hepzie can spend most of their time outdoors away from the cluttered house.  Her tranquillity is shattered when she catches a small boy throwing stones at the cows at the back of the house, and learns from a neighbour that the child, Stevie Horsfall who lives with his mother Gudrun is the bane of the village.  The following day Thea discovers the body of little Stevie Horsfall behind her car which she had left parked outside the cottage.

Although, it appears that Stevie has upset most of the villagers, suspicion falls on his mother Gudrum.  Investigating is Superintendent Sonia Gladwin, with whom Thea has a good relationship having met her on several previous adventures.

Thea’s life is far from dull, as telephone calls abound,  first from her daughter Jessica who is distraught at having being dumped by her boyfriend, and secondly from Victor, Yvonne husband.  Then visits from both of Yvonne’s children which seem to have no purpose, but get Thea's in investigating mode.

As in the last two books in this series, the undertaker Drew Slocombe makes an appearance.  Drew Slocombe arranges alternative funerals for those wanting a green experience. Drew's wife Karen is now seriously ill having never properly recovered from an injury she received three years previously, and Drew is feeling pressure from all sides, the business, his partner and his daily hospital visits to Karen.

An intriguing mystery, that so accurately portrays village life where the inhabitants have long-held secrets, which may hold the key to the killing of Stevie Horsfall. With a surprise ending Malice in the Cotswolds is an excellent entry in this acclaimed series.
----
Lizzie Hayes 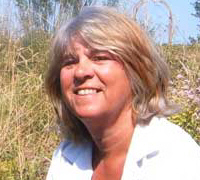 Rebecca Tope is the author of three popular murder mystery series, featuring Den Cooper, Devon police detective, Drew Slocombe, Undertaker, and Thea Osborne, house sitter in the Cotswolds. Rebecca grew up on farms, first in Cheshire then in Devon, and now lives in rural Herefordshire on a smallholding situated close to the beautiful Black Mountains.
Besides "ghost writer" of the novels based on the ITV series Rosemary and Thyme. Rebecca is also the proprietor of a small press - Praxis Books. This was established in 1992
Posted by Lizzie at 12:55