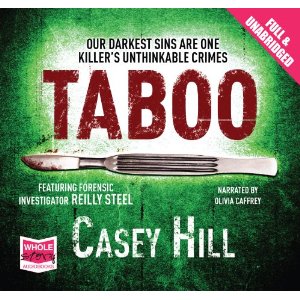 Read by Olivia Caffrey
Published by Whole Story Audio Books, July 2011. ISBN: 978-1-40748-565-2
(9 CD’s) Playing time 10 Hours.
Reilly Steel forensic investigator, born and bred, has taken a job in , to bring the police force into the forensic twenty-first century. had come as something of a shock to her.  Originally had sounded magical from tales told by her Irish father Mike Steel, but the of today she has found to be a very different place, and so has her father.
When the bodies of a young man and woman are found in an apartment in a good part of town it looks initially a possible killing followed by suicide, with no third party involved, but Reilly voices other possibilities much to the disgust of  Detective Pete Kennedy of the Serious Crime Unit - he is keen for an open and shut case. But Detective Chris Delaney has a more open mind and at least listens to her.  As more bodies turn up it becomes a serious possibility that they have a serial killer operating in .
Having a young American female brought in to update their forensic operation unsurprisingly creates tension and in some cases resentment. Reilly deals with the situation with professionalism. As Reilly and her team sifted through the ever increasing crime scenes, I was enthralled as along with the detectives the deductions begin to point in an unexpected surprising direction.
This is a well-plotted and fascinating mystery, with an interesting protagonist, who has a troubled past that is only slowly revealed, keeping the reader avidly turning the pages.  I highly recommend this mystery and eagerly look forward to hearing more of Reilly Steel.
Much of my enjoyment in this story comes from the narration by Olivia Caffrey - she has a beautiful voice, with that lovely Irish lilt which effortlessly produced a credible American accent when the story called for it.
------
Lizzie Hayes 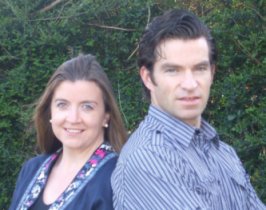 Casey Hill is the pseudonym of husband and wife writing team, Kevin and Melissa Hill. Melissa is a bestselling author in her own right with her hugely popular novels about contemporary women's lives. A deserve to delve into the darker side of fiction led her to team up with Kevin to write Taboo, the first in a series of forensic thrillers featuring Californian-born investigator Reilly Steel.

Olivia Caffrey has stage, film and TV experience, including Playing the Field and Waking the Dead. Her film credits include Conspiracy of Silence and The Matchmaker, and she has performed in a number of theatre productions including Pride and Prejudice and A Christmas Carol.
Posted by Lizzie at 17:55