‘Portrait of a Murder’ by Stella Whitelaw 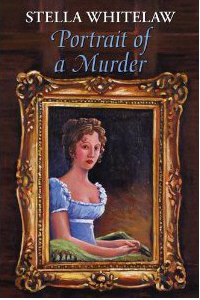 Published by Robert Hale
31st August 2011.
ISBN: 978-0-7090-9272-8
Harriet Dale is an out of work actor. To keep her a roof over her head she leases a shop which comes with an upstairs storeroom, in which Harriet lives. In her shop Magpie she sells vintage clothes which she picks up in a variety of places, charity shops being the most favoured.  But her main source of income whilst ‘resting’ is working as an insurance claims investigator for fat Gil  Paterson who has sexual designs on her.  Her current assignment is to get close to Barry Digby-Jones who has made a claim for a stolen painting ‘The Frightened Lady’ which Harriet discovers has an unusual history, in that the lady in question sat for the painting before her wedding, but was murdered as soon as the painting was finished, but before her wedding. The 200 year-old painting has gained a reputation of being cursed in that anyone who moves it dies.
Attending a fashion event at the Longstreet Manor in , the home of Barry Digby-Jones, Harriet slips into her persona of Henrietta, wealthy model girl about town.  Soon Barry Digby-Jones has sexual designs on her also.  Evading Gil’s pudgy hands and keeping Barry at bay is manageable – just. Then attractive Axe Winston steps into the picture, and lures her to lunch and feeds her strawberries on the beach – all manageable, but ex-lover Denzil who is stalking her with a knife is not manageable.
To get closer to discovering the whereabouts of ‘The Frightened Lady’ Harriet uses another of her disguises and becomes Harry – student.  Rushing around and adopting disguises is tiring but fun, but soon matters take a sinister turn, and despite being warned by DI Brice McDonald, who incidentally is the only man that Harriet would like to have sexual designs on her, she continues to pursue the painting which gets her into all sorts of trouble.
I enjoyed this caper immensely, Harriet is an engaging and resourceful protagonist, and her many guises entertaining.  There is a good twist at the end, and the mystery of the missing painting is satisfactorily resolved.  Good characterisation and some marvellous dialogue.
----
Lizzie Hayes

Stella Whitelaw is a British writer and journalist. She began her writing career as a cub reporter and rose to become the first female chief reporter in . She has published 47 novels, as well as over 300 short stories in national women's magazines. She was Secretary of the Parliamentary Press Gallery at the House of Commons.She was awarded an MBE in 2001 for services to journalism. She won the Art of Writing competition in the London Magazine, judged by Sheridan Morley and the Elizabeth Goudge Cup at . She lives in .
Posted by Lizzie at 09:51