‘A Fatal Fall of Snow’ by Joyce Cato 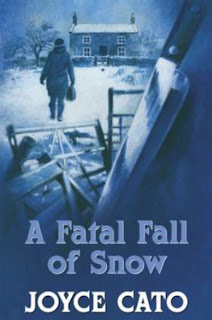 Published by Robert Hale on 31st August 2011.
ISBN: 978-0-7090-9273-5
Only the thought of Christmas alone and dwindling financial resources prompt cook Jenny Starling to accept a Christmas job in a farmhouse almost buried in deep snow - so pretty on a postcard, so treacherous for the walker, and with her trusty catering van unable to tackle the snow-packed roads Jenny is on foot.  With thoughts of a cosy farmhouse with roaring fires Jenny puts her best foot forward.  Arrival at Kelton Farm quickly dashes those dreams. Farmer Stanley Kelton runs his farm on Victorian lines. The only warm room in the house is the kitchen - lucky for Jenny.
There is also little warmth from the unhappy inhabitants, united only by their hatred of Stanley Kelton.  His sons Bert and Bill, his daughter Deila and his grandson Jeremy all seem cowed by Stanley Kelton, even his own brother Sid Kelton, with whom Jenny strikes an immediate rapport.
As Jenny cooks and watches she learns quickly of the unhappy situation at Kelton Farm mostly from her own observation but also supplemented by comments from the daily Mrs Jarvis.  The murder was a surprise, I was not expecting it, I had somehow transported myself to Cold Comfort Farm and I was so caught up in the characters, their lives and situation that the murder took me totally unawares, and I thought for a moment that it must be a mistake!
The investigating officer is Inspector Moulton, and it soon becomes apparent that it’s his first murder case. His side-kick Sergeant Ford seems to have something about him, but Jenny fears if she is to get out of this blighted farmhouse after Christmas she may have to solve the murder herself.
Joyce Cato has created a wonderful protagonist in Jenny Starling.  Although clearly rooted in reality she has a certain Mary Poppins quality that is both endearing and scary- her encounters with the gander had me holding my breath.
This is the second book featuring Jenny Starling, and whilst I greatly enjoyed the first one this is even better.  I can’t wait for the next instalment in the cooking assignments of Jenny Starling.
------
Lizzie Hayes

Joyce Cato was born in and went on to work as a secretary before becoming a full-time writer. This is the second book featuring cook Jenny Sterling,. The first, Birthdays Can Be Murder, was also published by Robert Hale.
Posted by Lizzie at 11:26