‘A Medal for Murder’ by Frances Brody 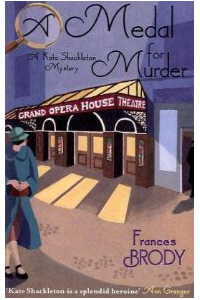 Published by Piatkus, 2010.
ISBN: 978-0-7499-4192-5
At the end of the Great War seeking information as to what happened to her husband Gerald, posted missing, Kate Shackleton undertook to locate missing persons as a kindness to other women in situations such as herself. Although still unclear as to what happened to Gerald, Kate has now in 1922 set up as a Private Investigator and following a robbery at a pawn-shop Kate is retained by the distraught owner to advise his customers of the loss of their items and if possible to track down the culprit.
Visiting to carry out her contractual obligation for the pawn shop owner, and taking the opportunity to see a play, Kate virtually trips over a dead body outside the theatre. Seeking another pawn shop customer Kate is approached by Captain Wolfendale who fears his granddaughter Lucy who was in the play has been kidnapped. Soon Kate is drawn into the lives of the actors.
The story is told with a series of flash backs to the turn of the century when Lucy’s grandfather was a Captain during the Boer war.  The descriptions of the scenes are quite harrowing, and invoke a terrible period in British history.
In A Medal for Murder, Frances Brody had produced a fascinating tale of deception, and murder, as she skilfully negotiates the reader through a tangle of fraud and dishonesty.
The characterisation is superb. Interestingly, one of Kate’s decisions brings her into direct conflict with her trusty sidekick the ex-policeman Sykes.  Whilst I could see Kate’s point, I felt that the reader knew more about the character in question than did Kate, and I wondered if Kate’s decision would come back to haunt her.
An excellent story well paced that keeps the reader turning pages. One of those unable-to-put down books.  Highly recommended.
------
Lizzie Hayes 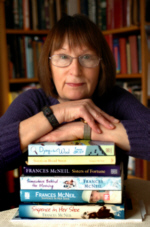 Frances Brody is a pseudonym of Frances McNeil who lives in where she was born and grew up. She worked in the as a secretary in and . studied at , and read English Literature and History at .
Starting her writing life in radio, she has written scripts for television and theatre. turned to crime for her fifth novel, Dying in the Wool, set on the outskirts of Bradford, in the 1920s.
Posted by Lizzie at 13:34