‘The Accidental Assassin’ by Jan Toms 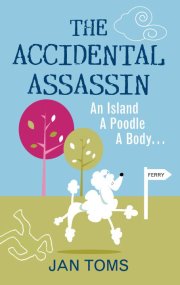 Published by The History Press,
25 July 2011.
ISBN: 978-0-7524-6270-7
Victor Green works for the tax office, thirty-seven and unmarried Victor is nervous of most things particularly authority, so when he receives a letter from the Council telling him to cut back his trees which are overhanging the road, Victor gets out the ladder.  Not happy with heights, a bird fluttering in his face and Victor falls killing a man passing beneath him, who was walking his poodle.
Reports of the incident in the in the local paper identifiy him as Vincent Green, but Victor is not too concerned as returning to work he is for the first time centre of attention – a novelty for Victor. The subsequent arrival of a cheque for £20’000 payable to V Green has Victor mystified, but with no return address, just an unsigned note with the words ‘ Be more discreet next time’.
Eventually the victim is named as Tommy Hewson, known as ‘Gruesome Hewson’.  This information is conveyed to him by his local bobby Constable Alan Grimes, who tells Victor that he has done the community a service as Gruesome was part of one of the gangland mafia. He gives Victor some background on the two gangs the Pretty Boys and the Blues Brothers who both started their lives in South London and subsequently moved to the . The whole thing alarms Victor so much that Alan has left before he remembered the cheque.
Soon Victor is caught up in the gang warfare unaware that both gangs think that he is the Vincent Green, the name used by international hit-man Vincenzo Verdi. As the two gangs try to take each other out hapless Victor is constantly in the wrong or maybe the right place at the wrong time, leaving innocently a trail of bodies behind him.  And when a lady takes an interest in him Victor is initially transported, but be careful what you wish for.
Jan has created some marvellous characters, Alan Grimes close to retirement and recently widowed, his daughter Charity who feels it’s her mission feed him lentils to keep him healthy, The Blue Brothers, Reggie, Randy and Dodge, and the Pretty Boys - Harry, Garry, and Barry, not to mention Fluffy the poodle. A fun read had me laughing out loud.
------
Lizzie Hayes

Jan Toms is descended from a long line of Islanders. Her previous works include twelve novels published under the name of Janet Mary Tomson; she has also written articles for Island Life Magazine, and the on-line magazine
101
, mostly historical in content. She is also the author of The Little Book of the Isle of Wight. Jan has recently taught creative writing for adult males in Camp Hill Prison. She lives in Freshwater on the .
Posted by Lizzie at 12:14