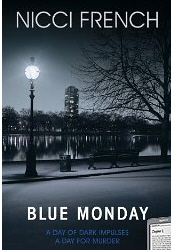 Published by Penquin Michael Joseph,
23 June 2011.
ISBN: 978-0-718-15495-0
In 1987 nine-year-old Rosie Vine is keen to get to the sweet shop. Impatient with her five-year-old sister Joanna she skips ahead, and Joanna is never seen again.
Twenty two years on five-year–old Matthew Farraday is abducted.  PsychotherapistFrieda Klein reads of this in the newspapers and is disturbed when she sees that the  photograph shown of Matthew is the image of a description one of her patients has given to her of a child that haunts him in his dreams. Worried that there could be a connection Frieda contacts the Detective in charge of the case, but Inspector Karisson is sceptical of Frieda’s suspicions.
As Frieda struggles to make sense of her sessions with Alan she begins to suspect a link to an earlier abduction. But the link is tenuous. Dealing with her own personal situation, and set against a backdrop of the labyrinth of London Streets this is compelling reading. The tension is palpable and this is a one sitting read, impossible to put down.
With an unexpected twist this is an incredible piece of writing, I was thrilled to see that this is the start of a series.
----
Reviewer: Lizzie Hayes

Nicci French
is a pseudonym used by Sean French and Nicci Gerrard,  two London journalists who conceive and write together psychological thrillers.
Posted by Lizzie at 18:12