Mark of the Lion by Suzanne Arruda 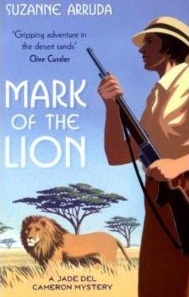 Published by Piatkus December 2010. ISBN: 978-0-7499-5331-7
Jade Del Cameron is the heroin we all long to be.  In the 1914-18 war she drove an ambulance on the front in France. Although surviving physically untouched herself, she lost her friend David. His last request to her was for her to find his estranged half-brother and avenge his father’s death.  This quest takes Jade to Nairobi where she becomes involved in intrigue and murder.

This is a true adventure, fraught with the threat of death from wild animals, from poachers of ivory, and from men lusting after money.  Straight from ‘Girl’s Own Adventure’ - I can remember reading such stories when I was very young, but even now when I am forty years on I was totally captivated and held enthralled by Jade’s adventures.  Proving that they are for more adult readership there is lust and romance. I lapped up this story and was excited to see that on my bookshelf was the next instalment ‘Stalking Ivory’. I can’t wait.  Highly recommended.
----
Lizzie Hayes
Posted by Lizzie at 16:41