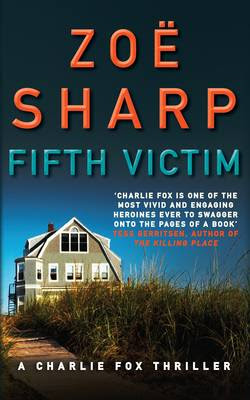 Publisher: Allison & Busby , March 2011. ISBN: 0749009328
With her partner Sean Meyer lying in a coma, ex-Special Forces soldier Charlie Fox takes a job as a bodyguard in Long Island, protecting the young daughter of an investment banker, following a spate of kidnapping amongst the wealthy Long Island set. Whilst Charlie takes to her employer, the formidable Caroline Willner, the daughter Dina is a rebellious teenager who insists she doesn't need a bodyguard.
As Charlie accompanies Dina to various parties she meets three of the kidnap victims, all in Dina's set and all of whom were eventually returned home safely after the ransom was paid. They seem unfazed by their ordeal, and Charlie begins to suspect that what initially looked to be a straightforward job could have complications; Charlie's instincts are telling her that not all the people she meets are what they seem. Could someone in this rich and privileged set be involved?

Charlie is a marvellous heroine, with a flawed past. Interestingly her boss Parker Armstrong comes more into focus in this book than in the earlier ones, which had me speculating!

As ever the writing is good and the characters well drawn. The book moves at a cracking pace towards a surprise ending with a jaw-dropping twist that has me eager for the next book. Not to be missed.
-----
Lizzie Hayes
Posted by Lizzie Hayes at 14:47