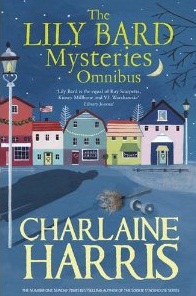 Published by Gollancz November 2010. ISBN: 978-0-575-09643-1
Charlaine Harris has for me always been linked with vampires mysteries which are not for me, but just before Christmas I received to review a beautiful book, which was by Charlaine Harris but announced itself as the The Lily Bard Mysteries.  I just loved it.
Lily Bard lives in the town of Shakespeare. When looking for somewhere to live she fixed on this town purely because of its name. Lily Bard is a survivor, a survivor of a horrific event. Although from a loving family she just could not handle the knowledge that everyone where she had been brought up knew what had happened to her, and so she moves to somewhere, new and when people found out about her she moves again – but for now she is in Shakespeare.  She works as a cleaning lady and that again gives her the freedom to work the hours she wants, where she wants, and on her own.
There are five books in this omnibus and I am glad that I read them one after the other for it has been an amazing journey with Lily.  Her journey has been a painful one. She has taken steps to never again be as vulnerable as she was. True, whatever we do we cannot always be totally safe but she has tried to stack the odds in her favour.
Whilst the mysteries are complex, intriguing and engaging, the strength of this volume of stories is in the journey of Lily Bard. Read it for yourself. Very highly recommended.
Posted by Lizzie at 16:39