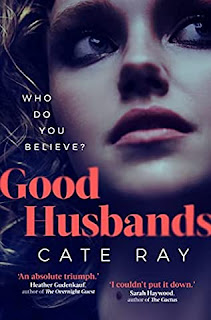 Three happily married women who love their husbands are each sent a copy of a letter claiming that about two decades previously their husbands, then only students themselves, were involved in the gang rape of a young student called Nicky. The letter also claims that the student they supposedly raped became pregnant as a result of the men’s/boys actions: one of the men had a daughter he didn’t know about. By the time the women receive the letters, both Nicki and her daughter are dead. However, Nicki’s daughter has provided them with a key to a lockup that contains clues about their lives.

Not surprisingly the ladies, who do not know each other, react differently to their letters - Interestingly none of them rushes to confront their husbands with the information. Jess, who works for a small agency selling works of art, takes it upon herself to track down and contact the other two, Priyanka, who teaches PSHE – personal, social, health and economic education – and Stephanie who is a receptionist at a dental practice.

Neither Priyanka nor Stephanie are desperately keen to pursue the matter – Stephanie hides her letter in an old coco tin and tries to forget it. However, once Jess gets all three of them together none of them of them seems prepared to dismiss the matter out of hand. Obviously, they want to know what will happen if they confront their husbands. They each have at least one child. Presumably if what the letter claims is correct it would mean the end of their marriages and depriving their children of a father, and who would want to trust their children to a rapist?

Good husbands is thought-provoking story that doesn’t flinch from addressing the heart- breaking issues that arise from the predicament the three women are presented with.  It is not so much a who-done-it, as a searching treatise on what should be done about it. The question of why the women had been sent the letters only after Nicki and her daughter were dead and presumably had nothing to gain from the action is answered, but you must read right to the end to understand the twisted and teasing reasoning behind it.
-------
Reviewer Angela Crowther

Cate Ray is the author of four previous novels published in the UK as Cath Weeks and was named an "Author to Watch" by ELLE.  She lives in Bath with her family.