‘The Last House’ by R.G. Adams 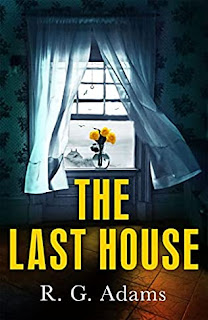 Social workers get a lot of flak from the media and the general public; when something goes wrong and children or vulnerable people come to grief, the blame often lands at their door. But all caring professions are populated by people who want to do their best for the people they’re looking out for, although like every walk of life social work has the occasional bad apple. It’s a world R G Adams clearly knows inside out, and in The Last House she presents a warts-and-all picture of it.

Kit Goddard knows that world from both sides. As one of five children of an absent father and addict mother, she spent much of her early life in the care system, and now a children’s social worker herself, that experience has made her willing to go the extra mile. She is all too aware of the problems faced by an understaffed and underfunded system, but still has no patience with box-ticking managers like Georgia, who has taken over from her previous boss Vernon, who was chaotic at times but ran on compassion rather than rules. So, when Georgia orders her to close down the case of Dylan, a teenage boy whose home life is shrouded in mystery, she decides it’s time for some creative rule-breaking.

What follows is a convoluted situation involving school bullies, a concerned neighbour, an adult care home and some inaccessible records, which lead to near-tragedy for the boy and his family and put Kit at risk of losing her job. At the same time Kit is trying to sort out her own dysfunctional family, which feels like a losing battle.

She finds support from unexpected quarters on both fronts, and eventually things are straightened out – though not without a lot of tension and moments of outright despair. It all adds up to a novel that doesn’t fall into the conventional mystery genre but jangles the nerves like the most complex psychological thriller. Better still, the characters are the kind you can imagine going on with their lives after the story ends, and the small Welsh town where much of the action takes place adds to the slightly claustrophobic atmosphere.

Reading some books, regardless of genre, is like observing events from the sidelines, and with mystery fiction mostly that’s fine, because no one hankers after feeling what it’s like to be murdered. Other books draw you into the world the author has created and involve you in what’s happening to the characters whether you want it or not. The Last House falls firmly into the second category. Highly recommended.
------
Reviewer: Lynne Patrick

R. G. Adams is a former social worker with thirty years of experience across all areas of social services. Her first novel, Allegation was published in February 2021. The Last House is her second novel. She lives in Wales with her family