‘The Pledge’ by Kathleen Kent 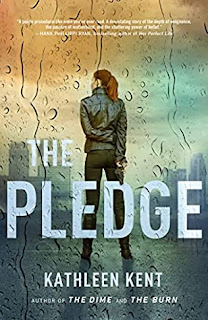 Set in Dallas Texas over a long two week period in 2014, The Pledge describes the difficulties encountered by the newly promoted Detective Sergeant, Betty Rhyzyc, as she tries to settle a turf war between rival drug dealers, El Cuchillo (the Knife) and Evangeline Roy.  El Cuchillo is the resident supremo, and Evangeline is muscling in on his patch.  The stakes are high.  El Cuchillo has told Betty he will kill her and those she cares about if she fails to apprehend Evangeline within two weeks, whilst Evangeline is determined to capture and torture/kill Betty whom she holds responsible for the death of her two sons. With El Cuchillo whispering death threats in Betty’s ear, and Evangeline and her religiously fanatical acolytes playing horrible cat and mouse tricks on Betty and her detectives, their work is challenging and highly stressful.

Betty’s home life isn’t much better. She and her wife, Jackie, have quite literally been left holding baby Elizabeth, whose seventeen-year-old mother, Mary Grace, rescued from the street when she was pregnant, has vanished without trace. Whilst Jackie clearly loves the idea of bringing up the baby, Betty is conflicted about the commitment and responsibility. Will the baby drive a wedge between her and Jackie? Will the baby’s rich grandfather succeed in claiming her? And precisely who is the nanny that Betty and Jackie had employed to help with the baby?  Life is more than a little frightening and far from simple for Betty as she juggles home and work.

The Pledge is imbued with a great sense of place.  Locations, and local issues such as displacement, racial and economic injustice, and alcohol and drug addiction are seamlessly woven into the fabric of the writing. We also hear a good deal about Betty’s youth, growing up in Brooklyn, with a weak mother and a bullying, alcoholic, policeman for a father.  The Pledge is the final part of a trilogy.   I hadn’t read the first two but found no problem as it stands happily on its own. It is, however, very tempting to go back and read the previous two, The Dime and The Burn to see how Betty has developed over the series.
------
Reviewer Angela Crowther

Kathleen Kent is the author of two best-selling novels, The Heretic's Daughter, for which she received the David J. Langum Sr. award for American Historical Fiction, and The Traitor's Wife (published in hardcover as The Wolves of Andover). Her most recent historical fiction novel, The Outcasts, was awarded the American Library Association’s “Top Pick” Historical Fiction in 2014 as well as being the recipient of a Will Rogers Medallion award for Western fiction. She has completed her fourth novel, The Dime, based on a short story published in the crime anthology Dallas Noir.  Her novels are collectively published in 16 countries.