‘Velvet was the Night’ by Silvia Moreno-Garcia. 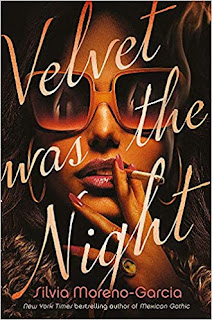 I confess I would probably not have picked this novel off a crowded bookshop table. The cover has a full-face image of an attractive woman bringing a smouldering cigarette to her partly open lips. A menacing male silhouette, reflected in her sunglasses, hints that something darker is about to come her way. And that something darker looks, on the face of it, like yet another lurid tale of female victimhood. Not my cup of tea.

But the decision to pass on Velvet was the Night would have been my loss: I would have missed a good story, well told. A story, moreover, that intrigues all the more by drawing on dramatic real-life events. At its centre are two young women living in Mexico City in the 1970s as the CIA-supported ‘dirty war’ against communism rages around them. Both will be caught in the maelstrom - for different reasons and with different consequences - and their fates will be irresistibly linked.

The first female is Maite, a self-perceived ‘old maid’ at 30, just about surviving her tedious life by daily immersion in the technicolour passions of her ‘Secret Romance’ magazines. The other, the beautiful Leonora, leads a life of apparent excitement and mystery that the envious Maite attempts to emulate - to her cost. A fateful decision to look after Leonora’s cat, driven less by friendship than by her desire to - literally - possess a part of her neighbour’s life, draws Maite into a dark and violent world.

Two males are also looking for Lenora, with different, but connected, motives: Rubén, a political activist and jilted ex-lover; and the pseudonymously named ‘Elvis’, a criminal gangster with dreams of being a better person. Both fasten on Maite as the key to the whereabouts of her missing neighbour. As the search for Lenora gains pace, and the mystery surrounding her disappearance deepens, the two males and the two females become entangled in slow-burning romantic ‘quadrangle’.

In essence, Velvet was the Night is a neo-noir thriller, wrapped around a sweet, soft-centred love story. The noirish world is effectively evoked - the smoky notes of the 50s song Blue Velvet drift across the pages - and the narrative runs with pace and verve. This, together with well-drawn main characters and a strong, twisty plot, make for a very enjoyable overall read.

And the novel delivers not one, but two important messages. The first is to live your own life, not covet those of others; the grass isn’t always greener on the other side and what you seek you may already possess. The second message? Oh, the great importance of not judging a book - paper or human - by its cover.
------
Reviewer:  C. A. Lupton

Silvia Moreno-Garcia is Mexican by birth, Canadian by inclination. She lives in beautiful British Columbia. Her first collection, This Strange Way of Dying, was a finalist for The Sunburst Award for Excellence in Canadian Literature of the Fantastic. Velvet was the Night is her most recent crime fiction novel.

C. A. Lupton spent her working life in the health sciences, the first 30 years in a university research unit and the final ten years as a research commissioner for the then English Department of Health. She is now retired and lives on the South coast with her family and no other animals. Carol has long admired the potential of grounded or ‘social’ sci fi to highlight, if not presage, some of the major threats and opportunities open to the human species. Red Dirt Girl, her debut novel, explores the ‘real and present danger’ presented by human genetic engineering.