‘The Shining Skull’ by Kate Ellis 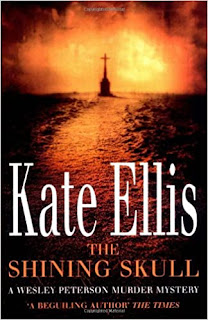 DI Peterson and DS Rachel Tracy are investigating a bogus taxi driver who abducts young women with blonde hair drives them to a remote place, and then cuts off their hair.  Whilst no harm, other than being scared half to death and having their hair hacked off, has come to these girls, but Wesley is worried that these abductions could escalate into something more sinister.

Meanwhile Marcus Fallbrookewho was abducted in 1976, returns home after thirty years and introduces himself to his half-brother Adrian.  As Marcus was never found the case has remained open, and when Leah Wakefield a teenage singing sensation is also abducted, Wesley is concerned to discover many similarities between the current case and the unsolved thirty-year old one.

As in previous books in the series, Wesley’s university friend, archaeologist Neil Watson has a case of his own, to check on the bodies in a vault with the records. He is astonished to find that he has one extra body for which he had no documentation and investigation leads him to a religious cult ca 1815.

On a personal level Wesley’s boss DCI Gerry Hafenhan, has a new girlfriend Joyce who has the dilemma of trying to care for her mother and hold down a job, or put her in a home. Gerry’s dilemma is should he tell his daughter he has a girlfriend. Wesley is a nice chap, so is unsuspicious of his wife Pam who is has a secret - a secret that unfortunately Neil is privy to. What could that mean for Wesley?
------
Reviewer: Lizzie Hayes 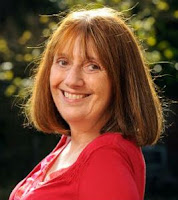 Kate Ellis was born in Liverpool and she studied drama in Manchester. She worked in teaching, marketing and accountancy before first enjoying writing success as a winner of the North-West Playwrights competition. Crime and mystery stories have always fascinated her, as have medieval history and archaeology which she likes to incorporate in her books. Kate's novels feature archaeology graduate Detective Sergeant Wesley Peterson who fights crime in South Devon.  Each story combines an intriguing contemporary murder mystery with a parallel historical case. She has also written five books in the spooky Joe Plantagenet series set up in North Yorkshire as well as many short stories for crime fiction anthologies and magazines. Kate was elected a member of The Detection Club in 2014. She is a member of the Crime Writers Association, Murder Squad, and Mystery People. She is married with two grown up sons and lives in North Cheshire, England, with her husband. Her most recent series is set post WW1.  Her most recent book is The Stone Chamber.