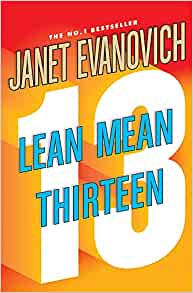 Doing a favour for Ranger (no, not that sort of favour), brings Stephanie into contact with Dickie Orr. For those of you not up to speed on the life and times of bounty hunter Stephanie Plum, Dickie Orr and Stephanie were once married for 15 minutes. Then she caught him cheating on her with her sworn enemy Joyce Barnhardt and the marriage was over.  Contact between Stephanie and Dickie is always fraught, and this episode is no exception, well except that applying bodily harm in front of witnesses is not a good move.  Then Dickie disappears and Stephanie is prime suspect.

So, the best thing to do is to find him …. not so easy.  Meanwhile, Stephanie needs to eat and that means bringing in some skips, this involves staking out a graveyard and trying to run to ground a taxidermist who has a neat trick with his stuffed animals.  Needless to say, Grandma Mazure is very much in evidence, and thinks that being a taxidermist might just be the thing for her.  She also gains a new beau, called Sweetie Pie.

Stephanie’s investigations into the whereabouts of Dickie Orr, lead her into many scraps, and she leaves behind her a trail of devastation, my favourite was the escapade that brought forth the comment ‘I was in love with the genius who invested the electric stapler’.

In this book Stephanie works quite closely with Ranger but nestles even closer to Morelli, the Italian cop. Better known by Stephanie’s father as the ‘Italian Stallion’.  Lula, her glock totting assistance, is meanwhile nestling up to Tank, who works for Ranger in his security business, but it’s a loose arrangement you understand.

Another fantastic adventure in the series.  Bring on the next one.
------
Reviewer: Lizzie Hayes

Janet Evanovich grew up in New Jersey, but now lives in Hampshire. She is the No. 1 New York Times bestselling author of the Stephanie Plum novels including Turbo Twenty-Three and Tricky Twenty-Two; the Knight and Moon novels including Curious Minds, co-written with Phoef Sutton; five novels in the Fox & O'Hare series - The Heist, The Chase, The Job, The Scam and The Pursuit - co-written with Lee Goldberg; the Lizzy and Diesel novels including most recently Wicked Charms, co-written with Phoef Sutton; twelve romance novels; the Alexandra Barnaby novels; the Troublemaker graphic novels; and How I Write: Secrets of a Bestselling Author. She has won several major crime fiction awards including the CWA John Creasey Award, Dilys Award and Silver Dagger.