‘The First Day of Spring’ by Nancy Tucker 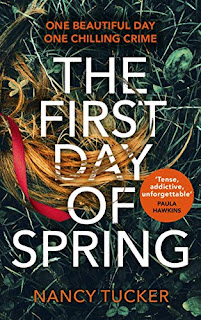 It isn’t often that the crime in a crime novel is committed in the first line. But then Nancy Tucker’s accomplished debut is no ordinary crime novel. It tells the story of eight-year-old Chrissie, who kills a toddler to see what it feels like, or so she tells herself. She doesn’t tell anyone she did it, of course; that would spoil the fizzing excitement of having such a big secret. She can’t understand why people react as they do; after all, he won’t stay dead for long, will he? Her da doesn’t; he keeps dying then coming back, or so he tells her.

Interleaved with Chrissie’s story is Julia’s: a young single mother desperate to take good care of her small daughter Molly, to avoid the social workers taking her away – so desperate that she runs away when Molly falls and breaks her wrist, in case she is accused of hurting or neglecting her.

For the reader, viewing both situations from the outside, a very different picture emerges from the ones inside Chrissie’s and Julia’s heads. I saw a little girl damaged and distorted by her background, deprived of the most basic of of care, either physical or emotional, by a mother who has no idea how to mother. Everything Chrissie does is a scream for attention; she just wants to be loved, or even liked, but tragically her behaviour has the opposite effect. Julia, on the other hand, wants nothing more than to be left alone to bring up her daughter. She makes sure Molly is clean and well fed and does everything to a strict routine that is more for her own benefit than the child’s. But she lives in fear, convinced that she is getting it wrong and will be found out.

Both story threads are deeply disturbing, Chrissie’s especially so. It isn’t much of a spoiler to point out that Julia is in fact the grown-up Chrissie, released from secure care when she was eighteen and given a new identity. It’s inevitable that social workers want to keep a careful eye on her, given her past – but in her case the secure care facility has done what it set out to: repaired much of the damage, largely by giving her the kind of attention a small child needs.

It’s a story about a crime and its causes and consequences, but ultimately about redemption and love. I have rarely read a novel of any kind, crime or not, in which the author makes a better fist of getting under the protagonist’s skin. At eight years old, Chrissie has no idea why people shun and judge her. Through her incisive but skewed perception a whole community, children, adults and their environments, comes to life. At twenty-five, Julia is more introspective, but still unable to see the people around her as they really are.

The novel is an eye-opener, and a heartbreaking one. As well as the drastic effects of neglect and deprivation on a child, it charts the emotional crimes people perpetrate on anyone who doesn’t fit their idea of normal. It made me think, and it made me cry. Occasionally it even made me smile. Who can ask for more of a novel?
------
Reviewer: Lynne Patrick

Nancy Tucker was born and raised in West London. She spent most of her adolescence in and out of hospital suffering from anorexia nervosa. On leaving school, she wrote her first book, The Time In Between (Icon, 2015) which explored her experience of eating disorders and recovery. Her second book, That Was When People Started To Worry (Icon, 2018), looked more broadly at mental illness in young women.  Nancy recently graduated from Oxford University with a degree in Experimental Psychology. Since then, she has worked in an inpatient psychiatric unit for children and adolescents and in adult mental health services. She now works as an assistant psychologist in an adult eating disorders service. The First Day of Spring is her first work of fiction.

Lynne Patrick has been a writer ever since she could pick up a pen, and has enjoyed success with short stories, reviews and feature journalism, but never, alas, with a novel. She crossed to the dark side to become a publisher for a few years and is proud to have launched several careers which are now burgeoning. She lives in Oxfordshire in a house groaning with books, about half of them crime fiction.
Posted by Lizzie at 17:22