‘Someone Who Isn’t Me’ by Danuta Kot 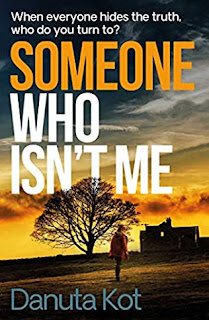 Bridlington is a pleasant resort on the Holderness Coast of the North Sea in the Yorkshire East Riding with fine beaches and attractive historical buildings. But, at least in this novel, it has another aspect, being a prime location for drug dealing, prostitution and human trafficking and laundering the proceeds. Involved in these criminal activities is the run-down pub, the Smokehouse, and its landlord, Carl Laverty, and investigating these activities is undercover detective Andy Yeatson. He has had some assistance from a young woman working in the pub, Becca Armitage, telling her that he is a private investigator and quizzing her about the pub’s dodgy customers yet meanwhile becoming increasingly attracted to her. But then he is abducted by a group of the pub’s customers who have clearly worked out who he really is; they kill him, intending to tip his body into the sea. But the body ends up in a desolate area called Sunk Island where the Holderness plains meet the Humber foreshore, a flat, waterlogged landscape formed over the ages from the mud of the estuary.

The police officer investigating Andy Yeatson’s death is Detective Sergeant Mark Curwen. He suspects that the Smokehouse pub may have something to do with Andy’s death but because he had previously initiated an abortive raid on the premises his card is marked, and he has to tread carefully. He manages through various ruses to get Becca to give him information about some of Andy’s contacts, but Becca is, for various reasons, highly suspicious of the police.

It is Becca who is the centre of this excellent story. She is deeply traumatised by an appalling childhood with an abusive stepfather and a neglectful mother, much of it spent in care. The only person who has got through to her is her foster-mother, Kay McKinnon, who is genuinely fond of Becca. But right now, Kay has her own problems; she is devastated by the death of her husband and also concerned for the welfare of a young girl, Poppy, who attends a welfare centre, Tania House, where Kay works. Poppy is on probation for drugs offences but has been failing to meet her probation officer. Is she back on drugs? If so, she is facing a prison sentence. And Kay has taken a temporary lease on a large, shabby house in Sunk Island while she looks about for something better where she can rebuild her life. A neighbour complains about strangers being in the district at night. And are there people coming into her house at night?

So, Becca is on her own. Her angry temperament makes life difficult for her but given her terrible childhood that is hardly surprising. In the pub she is more likely to snarl at customers than to smile and much the same is true of the supermarket where she works during the day as a shelf-stacker. The only capacity for love she seems to have is for a small, abandoned kitten, as semi-feral as Becca herself. When she learns that Andy was not a private investigator and more than that was married, she is enraged at him even though he is dead. But then she learns that he was widowed and has left a young child and that if she had him given all the information, he had asked her to get that might have saved his life, and she resolves, whatever the considerable risk to her, to get that information. Becca may not have been aware of her feelings, but we can see that, whereas Andy had been growing fond of her, she had fallen head-over-heels in love with him. Deep down Becca is longing for love, even where she rejects it. This makes her especially vulnerable.

The narrative is compelling and the climax, even on a second read, truly gripping. The characters are well-rounded. Both this, and its predecessor, Life Ruins (also reviewed in Mystery People), are well worth reading. I hope there will be successors and look forward to see how Becca, with her fiery spirit and fierce determination, achieves her aim of improving her life. Highly recommended.
------
Reviewer: Radmila May

Danuta Kot, who also writes under the name Carla Banks and Danuta Reah, was born in South Yorkshire. She comes from an academic family but opted out of formal education at the age of 16. She worked in a variety of jobs from barmaid to laboratory assistant, in a variety of locations, including a brief spell in Kingston, Jamaica. She went to university as a mature student and then went on to teach adults in Further and Higher Education. She taught linguistics and creative writing, and in the course of this, refined her own writing style. She published her first novel Only Darkness in 1999.  Danuta lives in South Yorkshire. She is past Chair of the Crime Writers' Association. A regular speaker at national and international conferences and literary festivals, she has appeared on radio and television.