‘Bury Me Deep’ by Jane Adams 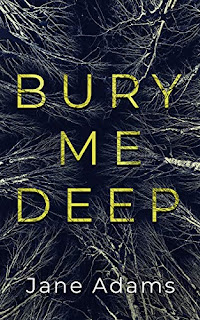 Bury Me Deep begins with two murders in the fictional town of Theadingford but - and here’s the twist - they are separated by more than a thousand years.

The first happens in the present day and describes an audacious killer who disposes of his victim in a grave that has been conveniently excavated as part of a local archaeological dig.  Detective Inspector Rozlyn Priest is called to the scene and recognises the victim as Charlie Higgins, one of her informers.  Whilst Higgins’s death is not surprising given his petty criminal status, the fact that his corpse has been dumped in an ancient grave is.  The law-enforcer’s eyebrows raise even higher when she finds out that the old English spear used as a murder weapon is not an artifact from this particular dig site.  So where did it come from?

The second murder is set in 878 AD when Allis Scrivener and her Welsh lover are battered to death as they plan a new life together far from Theadingford.  Lord Treven is charged with finding the perpetrator of the bloody act and he is assisted by his friend Hugh De Vries.  Both men are soldiers in King Alfred’s army, and they have been rewarded with additional responsibilities by their sovereign.  Treven was recently gifted Theadingford Manor by King Alfred but his promotion comes with strings attached.  The new lord of the manor has complicated local issues to deal with not least because Theadingford provides the last line of defence against the Danish King Guthrum’s warriors who frequently raid Wessex from their Chippenham stronghold.

The two very distinctive sleuths, one female and one male, one modern and one ancient, are gradually revealed to share certain similarities as the two storylines edge closer and closer together.  They are outsiders, forced to negotiate with members of the tribe to which they are attached rather than belong.  One aspect of their otherness lies in their respective responses towards otherworldly possibilities that transcend the human condition.

In Treven’s case, his attachment to the old religion is at odds with King Alfred’s Christian realm, whilst Rozlyn’s surname, Priest, hints at spiritual sensitivities which seem out of place in an increasingly material world.  However, the author presents Rosalind’s psychic awareness so deftly that it quickly seems quite natural for her dreams to inform the investigation.  Of course, she cannot reveal such intuitions to her colleagues, particularly the insufferable DCI Brook.

Bury Me Deep, the first in the Rozlyn Priest series, is a great read. The dual plots are as thought-provoking as they are intriguing and the character of Rozlyn is eminently likeable and engaging.  Jane Adams writes with assurance and pace; her prose is immersive, and the reader is involved in the action throughout the novel.  I thought her blending of two such different periods was nothing short of spectacular.  Highly recommended.
------
Reviewer: Dot Marshall-Gent

Dot Marshall-Gent worked in the emergency services for twenty years first as a police officer, then as a paramedic and finally as a fire control officer before graduating from King’s College, London as a teacher of English in her mid-forties.  She completed a M.A. in Special and Inclusive Education at the Institute of Education, London and now teaches part-time and writes mainly about educational issues.  Dot sings jazz and country music and plays guitar, banjo and piano as well as being addicted to reading mystery and crime fiction.
Posted by Lizzie at 13:17