'A Dangerous Place' by Jacqueline Winspear 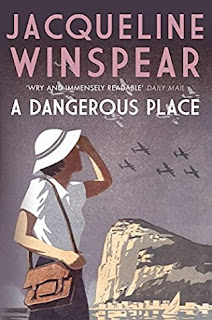 Fans of the Maisie Dobbs series will jump on this eleventh episode with cries of delight.  They will find that Maisie has moved on 4 years since the last book and is in a dark place.  She has experienced tragedy and is returning to England from India.  She has left the boat at Gibraltar feeling that she is not ready to go home.  We are in the Spring of 1937 so Gibraltar is full of refugees from the Civil War in Spain.  Maisie is warned about this dangerous place but takes no heed.

Within days of her arrival Maisie finds the body of a photographer -  she was walking in darkness through the streets when she tripped over something which she quickly realised was the man's body.  The police take the view that he was the victim of one of the refugees wanting money but Maisie is not convinced.  She starts to investigate what happened to Sebastian Babayoff, a member of the Sephardic Jewish community of Gibraltar.  She realises she is being followed and discerns that this is probably by orders from the authorities in London because of concern for her safety.  As Maisie becomes embroiled in Secret  Service matters she must decide who to believe.

The experiences of Maisie on the periphery of the Spanish Civil War are fascinating and believable.  Her skills of detection and long forgotten nursing skills are brought into use as she struggles to understand the case and to deal with her personal demons.  A satisfying read as Maisie puts clues together in a very complex situation.

I do not think that this would be the book to begin with if you have read no Maisie Dobbs books before.  The story would be coherent but the references to previous characters are so much more interesting if you know where they fit into the world of Maisie Dobbs.  This is a fascinating series about an emancipated and clever woman.
------
Reviewer: Jennifer S. Palmer

Jacqueline Winspear was born and raised in the county of Kent, England. Following higher education at the University of London's Institute of Education, Jacqueline worked in both general and academic publishing, in higher education and in marketing communications in the UK. She emigrated to the United States in 1990, and while working in business and as a personal / professional coach, Jacqueline embarked upon a life-long dream to be a writer.