‘Murder by The Canal’ by Judith Cutler 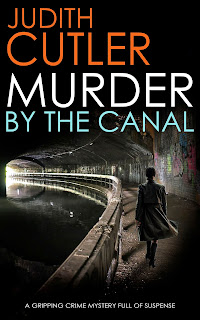 
Murder by The Canal opens with police officer Kate Power meeting a charming and confident businessman, Alan Grafton.  They are seated next to each other on a flight from Florence to Birmingham.  She’s returning from holiday to her new job as a detective sergeant with West Midlands Police, he’s just landed a deal that promises to make him rich.  Back on terra firma the pair exchange business cards with a vague arrangement to meet the following week.  Kate is somewhat ambivalent about their prospective date though.  She recently lost her partner, Robin, and is just beginning to find her feet back in Birmingham after transferring from the Metropolitan Police.  The policewoman lives in a house gifted to her by her generous but irascible Aunt Cassie, who has moved into a local nursing home.  Kate’s dwelling is spacious but in the process of having a much-needed makeover and doesn’t quite feel like home yet.

Personal preoccupations, however, fall away, when she is called to an unexplained death and recognises the disfigured corpse.  It is Alan, the man she had met on the plane, the man she had agreed to meet for a drink, and the man whom she later suspects had attempted to contact her at the police station whilst she was out, although the message has been either lost or removed from her desk.  When the post-mortem determines that Alan appears to have committed suicide the loss of the note seems less important and other crimes vie for CID’s attention.

To Kate’s annoyance, courtesy of the accelerated promotion scheme and the station’s new broom, Superintendent Neville, she is posted to the fraud squad and away from the action.  Despite being moved to the desk job Kate becomes embroiled in some unsavoury and dangerous situations.  The unfolding plot leads the DS inexorably back to her team – but there she is far from safe.

This is the second Kate Power novel and Judith Cutler’s protagonist is both likeable and realistic.  The detective’s experiences as a policewoman in the 1990s may raise some eyebrows amongst twenty-first century readers; the book details aspects of racism and misogyny that prevailed not only in the police force, but in British society generally at that time.  The author’s depiction of police officers who are as worried about their personal lives as they are about their working lives is both credible and refreshing.  The plot has pace and interest, and the final scene took me completely by surprise!

A fascinating and unusual crime thriller that I thoroughly enjoyed.
------
Reviewer: Dot Marshall-Gent

Dot Marshall-Gent worked in the emergency services for twenty years first as a police officer, then as a paramedic and finally as a fire control officer before graduating from King’s College, London as a teacher of English in her mid-forties.  She completed a M.A. in Special and Inclusive Education at the Institute of Education, London and now teaches part-time and writes mainly about educational issues.  Dot sings jazz and country music and plays guitar, banjo and piano as well as being addicted to reading mystery and crime fiction.
Posted by Lizzie at 15:19