‘Secrets on the Fens,’ by Joy Ellis 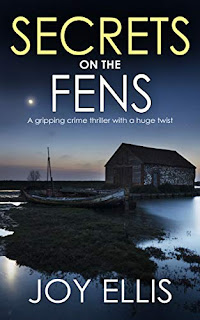 The discovery of two bodies in a clearing in Saltmere woods is, as Sergeant Danny Crier said ‘strange’. The bodies are of two young people lying on a blanket entwined. They look peaceful, she dark haired, lying on her back, the young man lying beside her holding a red rose.

Closer investigation by Detective Nikki Galena and DS Joseph Easter reveals that they were clearly killed somewhere else and then arranged to look like a lovers’ suicide pact. The team dub them Romeo and Juliet.

Eve Anderson and her friend from her RAF days Wendy Avery now retired from the MOD, had recently taken on the restoration of a Victorian artist’s attic studio, prompted by a guided tour of Oleander House which had shown the place to have been neglected for over a hundred years owing to a stipulation in the will that the studio was to remain untouched. But the owner Robert Richmond had managed to overrule the clause deciding it was time it was restore the studio.  Equally interesting to Eve and Wendy was the fact that the artist the late Robert Matthew Richmond had gone off one day to paint wildflowers and had never been seen again. Eve and Wendy love a mystery. A chance meeting with a lady who had inherited an original painting by Robert Matthew Richmond has resulted in an invitation to Eve and Wendy to visit her in the Lake District, as she has been doing some investigating of her own and suspects that there was foul play involved in the artist’s disappearance.

Opting for an early start for their drive to the Lake district, Eve and Wendy set out at 3.30 am, but haven’t gone far when they are flagged down by a group of youngsters who are worried by a light in a tunnel. When Eve and Wendy investigate, they find the tunnel blocked by a boat and on the boat are two dead bodies. A young man and a young girl lying on cushions with a pink heart-shaped helium balloon drifting upwards from the girl’s hand.

Who will be the next victims? And Why?

Secrets on the Fens is the 12th book in the  Detective Inspector Nikki Galena series.  Rich in characters, this is an amazing read.  Intricately plotted, can Nikki and her team unravel the mystery of the deaths of these young people and find the killer or killers? Both family dynamics and personal choices play a part. But not just one tantalising mystery, but two. Will Eve and Wendy discover the truth of the hundred-year mystery of the missing artist.  Secrets on the Fens is a page turner, and is most highly recommended
-------
Reviewer: Lizzie Sirett

Joy Ellis was born in Kent but spent most of her working life in London and Surrey. She was an apprentice florist to Constance Spry Ltd, a prestigious Mayfair shop that throughout the Sixties and Seventies teemed with both royalty and ‘real’ celebrities. She swore that one day she would have a shop of her own. It took until the early Eighties, but she did it. Sadly the recession wiped it out, and she embarked on a series of weird and wonderful jobs; the last one being a bookshop manager Joy now lives in a village in the Lincolnshire Fens with her partner, Jacqueline. She had been writing mysteries for years but never had the time to take it seriously. Now as her partner is a highly decorated retired police officer; her choice of genre was suddenly clear. She has set her crime thrillers in the misty fens.
www.joyellis.info
Posted by Lizzie at 13:51