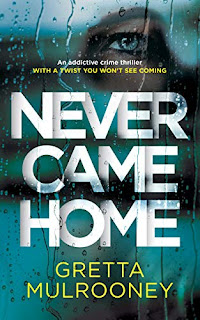 This is the second in the series featuring Detective Inspector Siv Drummond, English father, Finnish mother, set in the Sussex town of Berminster where Siv had spent her childhood and to which, after her husband’s death in a cycling accident, she has returned, still grieving but determined to get on with her life.

When, in the process of the demolition of a sprawling derelict building, the part-mummified remains of a woman are found, tied to the back grill of an abandoned fridge, Siv, along with Detective Sergeant Ali Carlin and Detective Constable Patrick Hill, investigate. The woman is identified as Lyn Dimas, aged in her forties, a podiatrist, who, six years previously had slipped out just for a little while to do some shopping, leaving her nine-year old son Adam on his own watching TV while her teenage daughter, Lily and her friends were spending the evening at a school prom. But when Lyn does not come home, her son in great distress, goes to a neighbour, Jeff Downey, who calls Lyn’s ex-husband Theo who comes round immediately with his new lover, Monty Barnwell. From that day to this there has been no news of Lyn; now she has been found it appears she had been strangled.

Now Siv and her colleagues must find Lyn’s killer and to do so they must unpick the tangled web of the relationships, not only of Lyn’s immediate family, but of anyone who might have had a motive for killing her. Lyn had reacted with fury to Theo’s coming out as gay, as had his father, a strict Greek Orthodox Christian. Lily, shallow, uncaring, and self-centred, feels that Theo’s coming out has made her look stupid; after her mother’s disappearance she abandons any idea of going to university and marries her boyfriend Pearce Aston. After her mother’s death she stops seeing her father, but not her grandfather who approves of her decision to marry young and be ‘a good wife’. Adam, on the other hand, is seriously psychologically affected by his mother’s disappearance; and becomes very withdrawn, overeats and falls behind in his education.

Although it is six years since Lyn’s murder, there is forensic evidence which indicates that Lyn might have been involved in sexual activity in the abandoned building where she had died. And although some of those who had reasons for wishing harm to Lyn have alibis, how reliable are those alibis? And as the network of relationships around Lyn grows ever more complicated, so the problems of untangling it grow ever more difficult.

What particularly impressed me about this story was the variety and depth of the characterisation of the participants, not just Lyn’s family and those connected to it, but also the investigators. Siv is not only impacted with grief by her husband’s death, but she has a difficult relationship with her selfish, demanding mother. Patrick Hill is the sole carer for his brother Noah who is seriously disabled by a stroke when still young. Now someone is siphoning money out of Patrick’s account but, with Noah too disabled to get to a bank, who can it be? Siv’s boss, DCI Mortimer, is surly; he hadn’t wanted her in the first place and makes his lack of enthusiasm very clear. Only Ali Carlin, from Northern Ireland, with his mixed Protestant/Catholic heritage with a dash of Mauritian, is always cheerful and supportive even though he smokes and eats far more than is good for him. I really enjoyed this story with its mix of convincing and lively characters. Recommended.
------
Reviewer: Radmila May

Radmila May was born in the U.S. but has lived in the U.K. since she was seven apart from seven years in The Hague. She read law at university but did not go into practice. Instead she worked for many years for a firm of law publishers and still does occasional work for them including taking part in a substantial revision and updating of her late husband’s legal practitioners’ work on Criminal Evidence published late 2015. She has also contributed short stories with a distinctly criminal flavour to two of the Oxford Stories anthologies published by Oxpens Press – a third story is to be published shortly in another Oxford Stories anthology – and is now concentrating on her own writing.
Posted by Lizzie at 15:59