‘Deadly Primrose’ by Suzette A. Hill 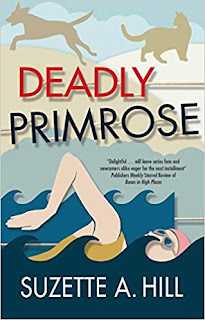 It’s 1958 and Primrose Oughterard is back in Sussex from her sojourn in Baden-Baden to where she had decamped to escape fear of police harassment.  You may ask why she felt the need to evade the police. It’s a long story. In a nutshell following the demise of her brother the Reverend Francis Oughterard1, who had accidently offed one of his annoying parishioners, one Chief Superintendent MacManus who has failed to crack the case, keeps sniffing around. Added to that is the problem of the late Latin master Mr Topping2, found dead in a car on Beachy Head, and Primrose felt it prudent to remove herself.

Now refreshed from her holiday, interestingly with a tan, Primrose is keen to resume her painting of sheep and ancient rustic churches to replenish the coffers. But first on the agenda is to retrieve Maurice the cat and Bouncer the dog, formerly belonging to her late brother, from their temporary quarters with Eric Tredwell in Brighton. Fans of the earlier books will recall the ‘cove’ Nicholas Ingaza who lived in Brighton and was the bane of FO’s life.  After a quick phone call, both four-footed friends were delivered the following day by Eric’s niece Phyllis, on a motorbike with sidecar. Said bike completely ravaged the newly laid gravel drive.

Catching up with events in Lewes, Primrose is shocked discover that Elspeth Travers has drowned while swimming in the sea at Birling Gap.  Knowing Elspeth’s dislike of swimming she seeks more information, and when it transpires that Elspeth met her demise in a black ruched swimming costume and pink floral cap. Primrose recalls a recent discussion when Elspeth said she wouldn’t be caught dead in one of those exaggerated bathing caps. Primrose suspects something is wrong.  Was her death really a tragic accident?  Primrose feels it’s her duty to investigate.

However, Primrose’s investigations lead her into several tight situations, which regrettably through no fault of her own produces yet more dead bodies, and visits from CS MacManus.

The story is told from multiple first-person narratives including those of Maurice, Bouncer and Primrose, not forgetting the correspondence between Emily Bartlett, the school secretary and her sister Hilda, who is currently taking care of their mother.

Rich in fascinating characters, from Alice, the late Elspeth’s dotty twin-sister, Nicolas Ingaza, known to the cat as that ‘Brighton type’ to the jovial Reverend Albert Egge, who makes lovely eclairs from which his parishioners’ benefit.  ‘Pull ‘em in somehow, that’s my motto’ he says.

The story moves along at a good pace as Primrose tries to extricate herself from some very difficult situations.  Thank goodness she has Maurice and Bouncer to help her.

Witty, with a delightful turn of phrase and tongue in cheek humour, I cannot recommend this book too highly.  It is a sheer joy to read.
------
Reviewer: Lizzie Sirett
1 See A Bedlam of Bones
2 See The Primrose Pursuit

Suzette A. Hill was born in Eastbourne, Sussex, in 1941; but has lived in many locations - the Midlands, Nottingham, Newcastle-upon-Tyne, Berkshire - and finally in retirement in Ledbury, Herefordshire. Although being an English graduate of two universities and having taught ‘Eng. Lit.’ all her professional life, she never contemplated doing any creative writing herself. It was only when she was sixty-four and well retired, that out of idle curiosity she thought she might try her hand at a short story - just to see what writing fiction felt like. And to her ongoing surprise A Load of Old Bones plus its four sequels was the result. A Little Murder (pub. Allison & Busby) is the first in a new series featuring Rosie Gilchrist and followed by The VenetianVenture & A Southwold Mystery, Shot in Southwold. The Primrose Pursuit (2016), the first book to feature Primrose Oughterard, is a link to the original ‘Bones’ series.