‘When Shadows Fall’ by Alex Gray 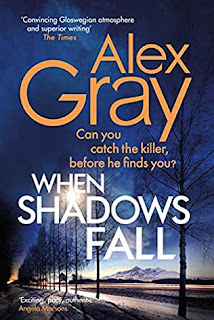 Published by Sphere,
19 March 2020.
ISBN: 978-0-7515-7643-6 (HB)
When Joseph Alexander Flynn discovers a skull in the garden he is digging over his first call is to Superintendent William Lorimer, whose garden he also looks after.  The people who own the property have only just moved in, and with no form of identification with the bones Lorimer must look further back in time to discover the identity of the deceased.
Whilst getting the murder investigation underway, because from the post-mortem it clearly is a murder investigation, he learns of the death of his friend and former colleague, retired ex-policeman George Phillips shot down in is garden.
Within days a second retired ex-policeman Stephen McAlpine is also shot dead, but in a different part of Scotland. Could the killing be linked? Could they be by the same person?
A third death is also a retired ex-policeman and it becomes clear that this is a systematic campaign. So are these revenge killings from someone who bears a grudge against the policemen which resulted in imprisonment?  But there seems no link between the victims.
Although there are multiple narrators, indeed, one being the perpetrator of the crimes, there are no clues at to who or why. As the killing continues, Lorimer starts to wonder if his name is on the list?
This is the 17th book in the series and it is good to meet up again with Lorimers friend the psychological profiler Solly Brightman and his wife Rosie.  And of course, Maggie Lorimer, still teaching but now also a writer of children’s books.

There are several interesting well-fleshed out characters that appear for the first time in this book and may not appear again but have a huge impact on the story. 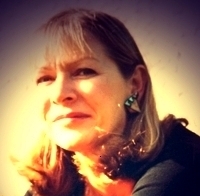 Alex Gray was born 27 May 1950, Glasgow.  She was brought up in the Craigbank area of Glasgow and attended Hutchesons' Grammar School. She studied English and Philosophy at Strathclyde University and worked for a period in the Department of Health & Social Security before training as an English teacher.  In 1976 she lived in Rhodesia for three months, during which time she got married, and she and her husband returned to Scotland. She continued teaching until the 1990s, when she gave the profession up and began to write full-time. Alex is a member of the Femmes Fatales crime writing trio, together with Alanna Knight and Lin Anderson. Her novels are all set around Glasgow and featuring the character of Detective Superintendent Lorimer and his psychological profiler Solomon Brightman.
www.alex-gray.com/