‘Darkness for Light’ by Emma Viskic 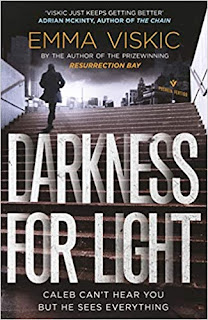 The quotation from Isaiah (woe to those who call evil good and good evil, who put darkness for light and light for darkness . . . )  well describes this third novel in the series featuring the deaf Melbourne PI Caleb Zelic. Despite his profound hearing problems Caleb manages well as a private investigator of business frauds etc although his marriage to sculptress Kat has been in abeyance after she suffered two failed pregnancies. But he must keep the business going even though his former partner and – he had thought - friend, Frankie Reynolds, having been revealed in a previous novel as secretly working for crime, had betrayed him and then disappeared.

So, Caleb is quite happy to meet a prospective client, a Martin Amon, at a children’s farm. And there he finds Amon – shot dead. He is interviewed by two police officers who reveal that Amon was, unknown to Caleb, a federal police officer. They let him go but very soon he is waylaid by someone he remembers all too well – he had encountered her when she had been searching for Frankie but had never known her name. She had been violent then, claiming it was to keep her cover; now she is equally menacing, threatening to have him arrested for the murder of one of Frankie’s criminal associates. Unfortunately, she is all too right on that score; that particular death was down to Caleb. He has to find Frankie. Perhaps her sister Maggie will know where she is. But when Caleb goes to Maggie’s house in a posh suburb of Melbourne, he finds that Maggie has been attacked and is seriously wounded. Her 9-year old daughter Tilda, however, is safe and Frankie appears and takes charge of the little girl. But then Tilda is abducted and matters, serious enough before, are now on a different level. And at the same time, Caleb’s elderly deaf friend Alberto who with his family runs a restaurant which has become a gathering place for others who also have hearing problems now seems uneasy about something. And problems, not to say bodies, multiply while the narrative winds backwards and forwards before reaching a surprising conclusion.

As can be seen, there is a lot of backstory in Darkness for Light which I have tried to indicate without giving away too much. Luckily most of the backstory is revealed in the first few chapters of this book, enough at least for the reader to appreciate what is going on. It is written in the same staccato style as the author’s first novel, Resurrection Bay, also reviewed in Mystery People (click on the title) which also matches the speed and violence of this book. The author, not being herself deaf, shows an impressive knowledge of how the profoundly deaf cope with the particular difficulties of their lives.
------
Reviewer: Radmila May

Emma Viskic is an award-winning Australian crime writer. Her critically acclaimed debut novel, Resurrection Bay, won the 2016 Ned Kelly Award for Best First Fiction, as well as an unprecedented three Davitt Awards: Best Adult Novel, Best Debut, and Readers' Choice. Resurrection Bay was iBooks Australia’s Crime Novel of 2015. She has also won the Ned Kelly and Thunderbolt Awards for her short form fiction. Emma studied Australian sign language (Auslan) in order to write the character of Caleb Zelic in Resurrection Bay. The second novel in the Caleb Zelic series, And Fire Came Down, will be out September 2017.  A classically trained clarinettist, Emma’s musical career has ranged from performing with José Carreras and Dame Kiri Te Kanawa, to busking in the London Underground.
http://www.emma-viskic.com/

Radmila May was born in the U.S. but has lived in the U.K. since she was seven apart from seven years in The Hague. She read law at university but did not go into practice. Instead she worked for many years for a firm of law publishers and still does occasional work for them including taking part in a substantial revision and updating of her late husband’s legal practitioners’ work on Criminal Evidence published late 2015. She has also contributed short stories with a distinctly criminal flavour to two of the Oxford Stories anthologies published by Oxpens Press – a third story is to be published shortly in another Oxford Stories anthology – and is now concentrating on her own writing.
Posted by Lizzie at 16:09