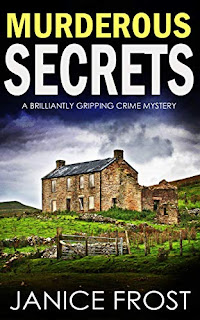 DS Ava Merry and the recently appointed DC Polly Jane Jenkins are preparing to attend a 1940s themed charity event.  The Valentine’s night dance is being held at Northfields Farm, a remote location about twenty-four miles from Stromford where the two officers are stationed.  Ava has agreed to attend in the hope that PJ, as Polly is known, will find welcome distraction after recently breaking-up with her fiancé.  Sure enough, before long, PJ finds herself dancing with a seemingly endless succession of young men.  Ava, happy to see her young colleague having fun, decides to leave the barn for some fresh air.

Once outside she sees some young boys hanging around and, true to her profession, she decides to investigate their behaviour, thinking that perhaps they are underage drinkers or looking for somewhere to smoke without their parents’ knowledge.  She follows them into what appears to be a garage in the grounds of the farm … what happens next triggers an investigation into a gruesome double murder.

The enquiry begins in the absence of Stromford C.I.D.’s lead officer, DI Jim Neal who has been attending his sister’s wedding in Scotland.  On his return he takes charge of the enquiry and learns that the farm is home to retired engineer Aubrey and wife Bea Stratford.  The couple run a glamping business at the farm, assisted by their children Blue and Monty, and the multi-talented, but secretive, Soren Hunter.  As the investigation progresses suspicion moves between the intriguing members of this unusual group and it soon becomes clear that Soren is not the only person with a hidden past.

The central protagonists Ava Merry and Jim Neal are likeable and interesting.  Ava has not been a detective sergeant for long and is still adjusting to her new responsibilities, whilst Jim, her supervisory officer, is a single father who is devoted to his son as well as his profession.  The narrative reveals tensions between the two detectives; they are both attracted to each other, but unsure about whether their respective feelings are reciprocated.  Of course, they are not the only characters who have complicated lives.  Soren Hunter’s back-story, for example, eludes the investigators and the reader alike until the very end of the book.  The interest created by the characterisation is fuelled by the strength of the plot which moves swiftly and is compelling.

Murderous Secrets is the sixth book in Janice Frost’s Neal and Merry crime series.  The book works perfectly well as a stand-alone and, as someone new to Frost’s writing, it certainly made me want to read the author’s previous novels.  It is a fast-moving and enjoyable read with a delicious twist at the end – highly recommended.
-----
Reviewer: Dot Marshall-Gent

Dot Marshall-Gent worked in the emergency services for twenty years first as a police officer, then as a paramedic and finally as a fire control officer before graduating from King’s College, London as a teacher of English in her mid-forties.  She completed a M.A. in Special and Inclusive Education at the Institute of Education, London and now teaches part-time and writes mainly about educational issues.  Dot sings jazz and country music and plays guitar, banjo and piano as well as being addicted to reading mystery and crime fiction.
Posted by Lizzie at 15:27