‘The Stolen Child’ by Sanjida Kay 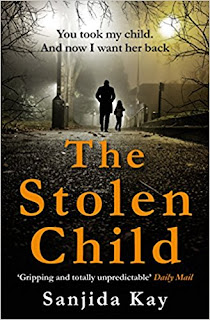 Zoe and Ollie Morley had tried for years to have a child but without success. They turn to the possibility of adoption and eventually are able to adopt a little girl from birth. They call her Evie and love her dearly. Seven years later they have moved to Yorkshire and, much to their surprise, a baby boy, Ben, has been born to them. It hasn’t affected their love for Evie, but she finds it difficult to adjust to the idea that she is not Zoe and Ollie’s birth child whereas Ben is.  Sophie is trying to restart her career as an artist while coping with Ben who is now an enchanting but demanding toddler and Evie who is emotional and troubled about her position in the family. Zoe gets little understanding from Ollie who is now obsessively building up his career as a high-flying accountant and has neither the time nor inclination to give Zoe the support she needs. Zoe is introduced to Harris, also an artist, who can provide that understanding and encouragement, but she steps back from any entanglement with him. At the same time Zoe discovers that Evie has been getting presents from someone who describes himself as her father. Zoe and Ollie are concerned; she contacts the adoption agency and they tell her to contact the police. This she does, and they think that Evie may be being stalked but can do little except to tell Zoe that she must be extra-protective of Evie. Then there is a crunch event: Ben is taken seriously ill and is in hospital with what turns out to be possible poisoning. And in the confusion arising from Ben’s illness, Evie goes missing.

I think this book could fairly be described as psychological suspense, domestic noir etc because it is as much about relationships within the circle of Ollie and Zoe’s family and friends as it is about the actual events. At the same time Ollie and Zoe’s frantic anguish at this double catastrophe is grippingly portrayed. Recommended.
-----
Reviewer: Radmila May

Sanjida Kay is a writer and broadcaster. Bone by Bone is her first thriller. She lives in Bristol with her daughter and husband.

Radmila May was born in the U.S. but has lived in the U.K. since she was seven apart from seven years in The Hague. She read law at university but did not go into practice. Instead she worked for many years for a firm of law publishers and still does occasional work for them including taking part in a substantial revision and updating of her late husband’s legal practitioners’ work on Criminal Evidence published late 2015. She has also contributed short stories with a distinctly criminal flavour to two of the Oxford Stories anthologies published by Oxpens Press – a third story is to be published shortly in another Oxford Stories anthology – and is now concentrating on her own writing.
Posted by Lizzie at 16:15