‘The Ruin’ by Dervla McTiernan 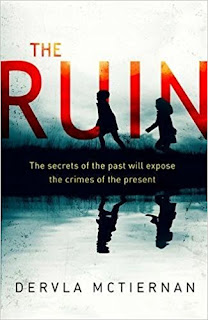 Twenty years ago, Cormac Reilly, then a new recruit to the Garda (the Irish police), had been called out to a remote house in County Galway for what he had been given to understand was a minor domestic dispute. When he eventually finds the house, there are two young children there, a teenage girl, Maude, and a much younger boy, Jack, who has an injury. Upstairs is their mother. She is dead. Unsure of what to do and unable to contact his colleagues because the car radio doesn’t work, he decides to take them both to the nearest hospital where Jack’s injury can be tended, and the care of both children undertaken by social workers. But at the hospital Maude disappears and, since it appears that her mother’s death from a heroin overdose may not have been accidental, she has become a prime suspect to which her disappearance adds. Cormac then moves to Dublin and becomes a leading member of the Dublin-based Special Detective Unit anti-terrorist unit. But the job is gruelling and when Cormac’s scientist wife Emma is offered a great new job in Galway, Cormac, deciding that he too could do with a change, returns to the Galway Garda. But he finds that his new colleagues are far from welcoming, apart from his old friend Danny McIntyre who has stayed with the Galway Garda and made little progress until recently when he is transferred to the Galway drugs squad. Cormac, however, spends all his time looking into a variety of cold cases. An apparently parallel story is that of Aisling Blake, a doctor at Galway University Hospital. She is ambitious and wants to train as a surgeon, but her ambitions are threatened when she discovers she is pregnant. She and her husband Jack are undecided about what to do; the important thing is their love for each other. And then Jack dies; he apparently threw himself off a bridge. Aisling is devastated but she does what is expected of her: goes to the funeral, receives the condolences of those who knew him, then decides to go back to work. What she is not expecting is a visit from a woman who insists that she is Jack’s sister and her name is Maude. Her arrival in Galway pulls in Cormac who links it to past cases of child abuse and that in turn leads to a vast web of allegations involving the past and the present.

This is an excellent story which will hold the reader right to the very end. Highly recommended.
------
Reviewer: Radmila May

Dervla McTiernan was born in County Cork, Ireland, to a family of seven. She studied corporate law at the National University of Ireland, Galway and the Law Society of Ireland, and practiced as a lawyer for twelve years. Following the global financial crisis, she moved with her family to Western Australia, where she now lives with her husband and two children.  Her debut novel The Rúin sold in a six-way auction in Australia and New Zealand, and has since sold to the United States, the UK and Ireland, and Germany.