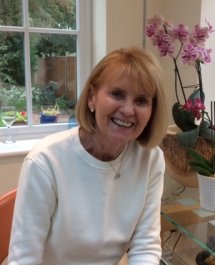 A J Cross is a forensic psychologist and court-appointed expert witness.
She obtained her Master’s Degree and PhD at the University of Birmingham, the latter relating to children as witnesses within the criminal court system.
Anne's professional experience has included consultancy work for the Probation Service in her home city.
Anne currently lives in Birmingham with her jazz-musician husband.


Dot: Hi Anne, I’ve just finished your latest book, Something Evil Comes, and whilst it’s not unusual to find a body in a crypt - it was in this case!  Could you tell us how you came up with such an intriguing storyline?
Anne: I'm fascinated by the concept of badness in an unexpected context. There have been many news reports of individuals who are regarded by definition as good when in reality they are not and that context is often religious. That started me off on the theme for 'Something'.

Dot: I was struck by how the novel manages to include fascinating aspects of the practice and procedures of a forensic psychologist, whilst maintaining pace and interest.  How do you achieve this important balance in your writing?
Anne: it can be difficult because the temptation is to give chapter and verse of what you know which can kill a novel's pace. The trick is to create a distillation of a theory so that it's fully informative, relevant but also economical. The danger always is that if you love your area of expertise you are likely to Go On And On. It's a tendency I have to fight against.

Dot: Matthew Flynn, the victim, in Something Evil Comes, is a fully rounded character, given voice and influence through Kate’s work on the case.  The centrality of Matthew’s character is reminiscent of a scene in your first novel, Gone in Seconds, where Hanson illustrates to her students that victims are often forgotten, whilst the perpetrators of crime invariably gain notoriety and are remembered.  How important is it for you, as an author, that victims are given this prominence, and does this resonate with you in your work as a forensic psychologist?
Anne: This is a great question. It goes to the heart of what I try to show in my fiction and it links with my protagonist. Kate Hanson's drive to achieve justice. In my work as a forensic psychologist there have been one or two cases over the years where it felt as though the victim was not only robbed of life but also forgotten. It can leave you feeling helpless, so I suspect that Hanson is my way of redressing that because she's always for the victim and as the author I can help her achieve justice for that person, although it isn't always neatly or entirely achieved. As a crime writer, I'm constantly putting characters in jeopardy or killing them off which, let's face it, is essential to the genre, but I never want that aspect to become central - it's the victim and the search for justice which drive what I write.

Dot: Anne, I believe that you originally began to study educational psychology, but that you switched to work as a forensic psychologist.  Could you tell us a little bit more about what prompted that change of direction?
Anne: I was at university doing a Master’s degree course in educational psychology. One of the course tutors was a forensic psychologist and he gave a lecture on the demands placed by the criminal justice system on children who were required to go to court as witnesses if they had suffered some kind of abuse. I couldn't believe that what he was saying was actually happening to children in our courts at that time and it led directly to my PhD research. This was some years ago and thankfully it's changed for the better, although I doubt that it is entirely child centred even now.

Dot: So, there you are, a successful forensic psychologist, at what point did you decide you wanted to write about crime fiction, and how did you embark on your authorial journey?
Anne: I've been a voracious reader of crime fiction for as long as I can remember. I'm fascinated by the capacity for people to behave in such widely and wildly(!) deviant ways yet it wasn't until around 2006 that I realised that being a forensic psychologist was a good starting point for me as a fledging author. I know: a little slow on the uptake but once I got the idea I just thought 'I can do this.' Of course, I didn't have a clue what I was doing but somewhere along the line I got it right, got an agent and a publisher. You just need to have a go if you really want to do something.

Dot:      The relationship between Kate Hanson, Joe Corrigan and Bernard Watts are central to Something Evil Comes and the other novels in the series.  When you conceived the first book, did you envisage the individuals who make up the Unsolved Crimes Unit developing in the ways they have done?  Do they ever act in ways that surprise you, their creator?
Anne: Bernard Watts crashed onto the page as an amalgam of Birmingham males I have known and a good foil for Kate Hanson whom he regards at the outset as an ivory-tower academic and, worse, a southerner! Over time he's become more accepting of her expertise but they're both strong characters, so they inevitably clash.  Lieutenant Joe Corrigan was intended as a source of gentle humour because Hanson tends to be all work but over time he's grown as a character in ways I didn't foresee.

Dot: Staying with the characters for a moment, you include Joe Corrigan, an American police lieutenant, in the Unsolved Crimes Unit.  I’m interested how you came to make this authorial choice? (I adore him, by the way!)
Anne: Glad you feel that way about him. For me, he's the 'quiet American ' who adores Hanson, although to date she's having none of it! I need to be honest here and say that apart from the low-level comic relief he sometimes brings to scenes he was also a distinctive voice, clearly distinguishable from those of Hanson and Watts. I should have known that he wouldn't settle for that, No way, Jose!
My books are now published in the USA which I'm truly thrilled about as I love the place!

Dot: How do you begin your writing, what sparks ideas for your plots?
Anne: It's often something really small, even inconsequential, like a comment on the news and my head just goes with it, develops it into a whole plot. For example, winter darkness and cold are fertile ground for someone scary to be prowling around with murder in his heart - but what about swapping the context to a heatwave?  I know. Sounds like nothing but it's got my interest.

Dot: Had you written any fiction before you began the Kate Hanson series?
Anne: Not a single thing. Worse, it never occurred to me to try - until I thought I could do it.

Dot: And following on from the last question, now that you have had such success with your work how do you sustain the series?
Anne: I think my enjoyment of the characters and the situations I drop them into make it work. I really know them now so I'm aware how far I can push them yet maintain their believability. None of them is perfect. They have their foibles. I care about what happens to them. I think it all helps.

Dot: I’m a great fan of audiobooks and I know that at least two of your novels, Gone in Seconds and Art of Deception, are available as unabridged recordings. Would you tell us how this came about this, were you involved in the process in any way, and are you happy with the productions?
Anne: Actually, it just happened without my being involved but it made me realise how much I knew about the chapter of Kate Hanson. I listened to the audio and my immediate response was, 'That's not Hanson 's voice.' Which it wasn't, of course. That only exists inside my head!

Dot: You have just completed your fourth forensic mystery involving Kate Hanson.  Are you planning to write more? (I hope the answer is yes!) And finally, have you any other sleuths that are waiting to be released in print?
Anne: I can't imagine myself leaving these characters just yet. I'm too curious to know what happens to them. I'm currently coming to the end of my fifth book which is entitled Cold, Cold Heart whilst also gathering ideas for the sixth. So far, that's a jumble of scribbled notes in a tatty folder.

Dot:  Thank you, Anne, it has been a pleasure to conduct this interview with you, and to learn more about how you go about creating such fascinating plots and memorable characters.  I look forward to reading Cold, Cold Heart and, when it emerges from the folder, book six!

Dot Marshall-Gent worked in the emergency services for twenty years first as a police
officer, then as a paramedic and finally as a fire control officer before graduating from King’s
College, London as a teacher of English in her mid-forties.  She completed a M.A. in Special and Inclusive Education at the Institute of Education, London and now teaches part-time and writes mainly about educational issues.  Dot sings jazz and country music and plays guitar, banjo and
piano as well as being addicted to reading mystery and crime fiction.