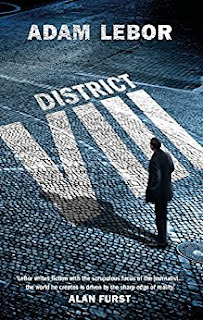 This first in a new series features Balthazar Kovacs who is both a policeman in Budapest’s murder squad and also a Roma gypsy. His fellow policemen distrust him because he is a gypsy and his fellow-Roma, even his family, distrust him because he is a policeman. At the time the story is set, Hungary, like much else of Europe, is finding it difficult to cope with the crowds of refugees from Syria and elsewhere flooding into the country from Serbia but unable to get out of Hungary because Austria has closed its borders. As a result, huge numbers of refugees are camping outside Keleti Railway Station in Budapest in chaotic and unsanitary conditions, hoping that the trains will start running again. One unwelcome consequence of this is that racial tensions between the Hungarian population and the refugees are growing; there has already been some violence towards the refugees and it is all too reminiscent of the part played by Hungary in the wartime deportation of Jews and gypsies to the Nazi death camps.

Balthazar has been sent on his mobile a photograph of an apparently dead man in another Budapest square but when he gets there the body has disappeared although he does find a SIM card which he takes. Just as a young gypsy boy is telling him that the body has been taken away in a van the Gendarmerie appear (a fictitious recreation of the original wartime Gendarmerie which had organised the wartime deportations) and threaten Balthazar. Balthazar’s boss, Sandor Takacz, tells him officially to stay off the case which is now the responsibility of the Gendarmerie while at the same tipping him the wink that if he wants to investigate on his own account that’s his affair. He also shows Balthazar an article written by Balthazar’s former girlfriend, journalist Eniko Szalay, describing how false passports are being issued to some migrants describing them as Roma; under the Schengen rules all EU citizens are allowed free passage to a number of EU countries. Meanwhile, a civil servant from the Ministry of Justice, Akos Feher, has been summoned to the British Embassy to meet with one of their staff, Celeste Johnson (clearly an MI6 operative) who tells him that not only are some of the passports of alleged Hungarian citizens clearly fakes but that some of the passport holders may well be jihadi terrorists. In fact Feher is deeply involved in the fake passports corruption and there is evidence substantiating this. But the web of corruption stretches higher . . . to the Minister of Justice, the glamorous Reka Bardossy, even to Reka’s occasional lover, Pal Palkovics, the Prime Minister. And some mysterious money men make it plain to Palkovics that if he doesn’t deal with Balthazar, Reka and anyone else who stumbles into this web, it will be the worse for him.

This is an intricately-written story which combines convincing fictitious characters with a fascinating (if somewhat depressing) picture of present-day Hungary. Recommended.
------
Reviewer: Radmila May

Adam LeBor was born in London in 1961. He is a British author, novelist and journalist. is a veteran foreign correspondent who has covered Hungary and eastern Europe since 1990. He is the author of thirteen books, including Hitler's Secret Bankers, which was shortlisted for the Orwell Prize. He writes for the Economist, Financial Times and Monocle. He divides his time between Budapest and London.