'Out of Mecklenburg' by James Remmer 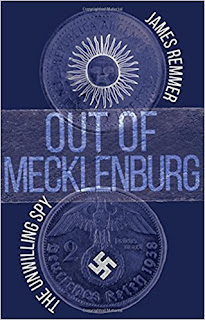 In World War II the Nazi government had two well-established spying agencies: the Sicherdienst (SD), part of Germany’s mainstay security apparatus presided over by the infamous Heinrich Himmler and the equally infamous Reinhard Heydrich; and the military Abwehr, part of the German Army hierarchy. But as Hitler prepared to invade the Soviet Union his Foreign Minister Joachim von Ribbentrop set up a third spying agency, Information Department Three. All three agencies detested each other.

It is to this third agency that the young diplomat Carl von Menen whose aristocratic family is from Mecklenberg (in what subsequently became East Germany) is recruited and is immediately sent to Argentina. Von Menen is on the face of it an ideal choice being a fluent Spanish speaker as well as a highly intelligent and accomplished diplomat. What the authorities do not know about him is that he is strongly anti-Nazi and is connected to an anti-Nazi organisation, the Kreisenau Circle. The reason for sending von Menen is to report back on a new group in Argentina’s volatile political situation, the United Officers Group (the GOU), a pro-Nazi faction of military officers whose leader is the ambitious Juan Peron. On the voyage out von Menen encounters and falls in love with a beautiful young doctor, Maria Gomez, and she with him. Maria is deeply anti-Fascist as is most of her family with the exception of her uncle Felipe Vidal who is strongly pro-Fascist and supports the GOU, seeing it as a way to advancing his own ambitions and supplanting Peron. Von Menen’s task is to find out what he can about the GOU and feed the information back to Information Department Three. His ambiguous role in Argentina leads him into considerable danger, and throughout the story his fears for his family and friends haunt him while at the same time he is determined that his spying will neither compromise them nor give undue assistance to the regime he  detests.

This is a very long book which covers virtually the whole period of the war from 1941 to the fall of Berlin. The author’s commitment to deep and wide research is evident throughout so that we follow not only von Menen’s story but the wider narrative of the war itself. And the toll taken by the war on the people of Germany, led almost to total destruction by Hitler, with all its pain and distress is brought home to the reader again and again. Part of the narrative is told from the point of view of von Menen’s father, General von Menen, who has been tasked by the Gestapo with dealing with a vast amount of gold bullion, to abstract the bullion and divert it to some better, worthier purpose when von Menen  also becomes involved: his plan is to get the bullion to Argentina where popular sentiment is very much on the side of the Allies and Peron himself, for all his Fascist inclinations, does not want to give the U.S. an excuse to intervene in Argentina.
-----
Reviewer: Radmila May