‘Here and Gone’ by Haylen Beck 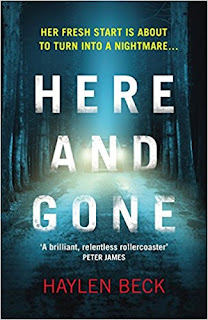 Audra Kinney is on the run, her two children, 10-year-old Sean and six-year-old Louise, with her. It’s days since they left her abusive husband Patrick behind in New York and headed for California and her old friend Mel. Now they’re part way there, in Arizona desert country where guns are as available as bottled water. Audra’s exhausted, so are the children, and Louise, always delicate, has developed a worrying cough. Nonetheless, Audra presses on, knowing that not far ahead is a small town where they can rest for the night. But then they are followed by a car from the local sheriff’s department and Audra’s worries increase. She has a history of drug abuse and alcohol, encouraged by Patrick who had used her addiction to subdue and humiliate her, which she had only broken by leaving him some time before since when she has been completely clean. Patrick, however, determined on revenge, has taken out a court order that the children should reside with him. That had been the trigger for Audra’s flight from him and when she is pulled over by Sheriff Whiteside her terror is at peak level. The sheriff orders her to get out of the car on the pretext that it is overloaded; he then goes through not only the car but the boot. And in the boot, he finds a bag of marijuana leaves. Certainly not Audra’s, someone else must have put it there. Whiteside arrests and searches Audra, using the search as a pretext for a quick grope, and calls up his deputy, Deputy Collins. She is instructed by Whiteside to take away Sean and Louise in Audra’s car while Whiteside takes Audra to the sheriff’s office and puts her in the cells. By this time, not knowing what has happened to the children, Audra is distraught, but Whiteside now says. ‘Children? What children? There were no children.’  An agent from the Child Abduction Department of the FBI is called in to assess the case but she is not inclined to believe Audra. And now there is widespread media coverage all over the U.S. and Audra is looked on as a possible murderer of her own children. But in California Chinese-American Danny Lee recognises similarities between this case and the disappearance of his young daughter five years ago while travelling with his wife. The little girl had never been found and Danny’s wife commits suicide. Now, seeing the parallels between Audra’s situation and his own, Danny resolves to travel to Arizona and contact Audra. Can he help her?

I thought this was a first-class story which more than lived up to the description on the cover: ‘the heart-stopping thriller of 2017.’ I am not surprised to see that it is to be filmed. Audra’s agony at her children’s disappearance is totally convincing. Her son Sean is an appealing character, strong and supportive of his little sister.  Even Whiteside and Collins both have occasional doubts about what they are doing; just enough to establish them as rounded characters but not enough to win our sympathy. Haylen Beck is in fact the androgynous pseudonym of Stuart Neville, prize-winning author of the Belfast-set DCI Serena Flanagan series, and this book demonstrates the author’s quality as a writer.
------
Reviewer: Radmila May

Haylen Beck is the pen name of internationally prize-winning crime writer Stuart Neville. Writing under his own name, Stuart won the LA Times Book Prize for his debut novel and received critical acclaim for his Belfast-set detective series starring Serena Flanagan. His Haylen Beck novels are set in the US and are inspired by his love of American crime writing.