‘When She Was Bad’ by Tammy Cohen 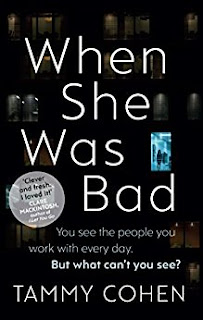 In this psychological suspense novel, five women and two men work in the recruitment department of the Mark Hamilton Recruitment company. They have all been working well together – Sarah, Charlie, Chloe, Ewan, Amira, under the direction of Gill, the easy-going department head, and her deputy, Paula – until the company boss, Mark Hamilton, decides that the department lacks dynamism and summarily fires Gill, allowing her just enough compensation to make recourse to the unfair dismissal procedure not worthwhile. He replaces Gill with Rachel Masters from another department; she has a reputation for getting results but also for being difficult, demanding and divisive. Rachel sets the tone from the outset: when Paula welcomes her to the department, saying that they’re all a pretty friendly bunch, Rachel’s response is that she’s not there to make friends. Her technique is to set one department member against another, by making it clear that Paula who is now 55 is also past her sell-by date, indicating to Charlie and Amira that they are in line for Paula’s job, and being unforgiving of personal problems such as the difficulties Sarah has juggling husband and two small children. Paula herself is the sole family breadwinner and her marriage has effectively fallen apart. Amira and her partner have taken out a sizeable mortgage which they can barely afford; nonetheless Amira is a shopaholic and has maxed out all her cards. Charlie is gay and thinks he has found true love through a dating agency but his lover Stefan is plainly giving him the big run-around and Rachel’s hints about promotion threaten his friendship with Sarah. Youthful naïve Chloe makes friendly overtures to Rachel but is repeatedly snubbed. Moreover Chloe has fallen in love with Ewan but he is attracted to Rachel who occasionally strings him along but it is clear that she isn’t really interested in him. And has Gill really taken her dismissal as peaceably as she appears to have done? And there is another narrative, that of the American academic, the psychiatrist Anne Cator, which is skilfully interspersed with the main story: years ago when Anne was just starting out on her career, her first case involved two children, brother and sister, one of whom was being brought up in appalling circumstances of neglect and brutality, the other loved and petted by her unspeakable parents but also made to take part in the abuse of her brother. It is clear that the one of the characters in the England-set story is in fact one of those abused children; but which one? The killer? The victim – actual or potential?

My attention was drawn to this author, who has written a number of other books, at the first Killer Women Festival reported in the December 2016 Mystery People blog where she and fellow-writer Amanda Jennings held a workshop on the still highly popular psychological suspense genre. Most novels in the genre have a strictly domestic setting, but I liked the idea of an office setting as being different. I was impressed by this book, particularly by the psychological aspects – all too believable. There is an account of a team-building weekend endured by the department members which is so awful that it would be funny were it not for the underlying psychological tensions which the reader knows will lead to tragedy although the final climax does not come until Rachel’s doomed attempt to mend fences in her own ultra-modern luxury home. And at the very end, when it seems that harmony has been restored, there is a truly chilling coda. Recommended.
------
Reviewer: Radmila May

Tammy Cohen (who previously wrote under her formal name Tamar Cohen) has written several acclaimed novels about family fall-out:The Mistress's Revenge, The War of the Wives, and Someone Else's Wedding. The Broken was her first pyschological thriller, followed by Dying for Christmas. Her brand new hardback novel, First One Missing is out now.  She lives in North London with her partner and three (nearly) grown children, plus one badly behaved dog.