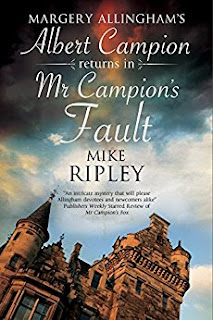 Margery Allingham was one of the Queens of Crime, the great crime writers of the Golden Age, to this day still popular. She died in 1966 and her husband, Pip Youngman Carter, wrote a number of sequels following the exploits of the aristocratic Albert Campion, but died. After he died Mike Ripley took up the baton and has now written another three of which this book is the third.

We are now in the late sixties at a time when the zeitgeist was changing: it was the era of pop culture and the growth of the youth cult along with the birth of feminism. Campion himself is considerably older, as is his wife, the redoubtable Lady Amanda. But he is still the same figure that he was in the earlier novels, hiding behind owl-like glasses and a deceptively mild manner, a sharp intelligence and perception of human nature mixed with a deep sympathy for and empathy with those whom he encounters.

In the North Yorkshire mining village of Denby Ash, the widow Ada Braithwaite, normally a strong and resilient woman in the tradition of Yorkshire folk, has been seriously unsettled by the apparent haunting of her house. No apparitions but something which has caused the house to shake and groan, crockery to smash, and plaster to fall from the ceiling. Unlike some of her neighbours, Ada refuses to believe that it could be the ghost of her late husband, killed in a mining accident, all-too common at the time. Bertram Browne, senior English teacher and rugby coach at a local private day school, Ash Grange where Ada’s son Roderick is a scholarship day-boy, has heard from Roderick of the apparent haunting. He visits Ada but as he leaves he is run down and killed. Meanwhile Campion’s actress daughter-in-law Perdita has been asked by her godfather, the headmaster of Ash Grange School, to take a temporary position at the school to replace Bertram Browne while a replacement is sought, and he has suggested that Campion’s son Rupert could temporarily take on the post of rugby coach. So Perdita and Rupert set off to Denby Ash. Among Perdita’s duties is the production of Christopher Marlowe’s play Dr Faustus with brass band accompaniment for the school prize day; Bertram’s sister Hilda has cast herself as Helen of Troy and is making rather more of the role than the text prescribes while local trade unionist and committed socialist Arthur Exley conducts is the brass band conductor. But both Perdita and Rupert find their tasks rather more of a challenge than they had anticipated. And there is rather more going on beneath the surface of Denby Ash than seems at first sight: Roderick Braithwaite and his friend, Andrew Ramsden, son of the local Chief Inspector, are investigating the mysterious events at Ada’s house even consulting local witch Ivy Neale; local bad boy, swindler Haydon Bagley, has been released from prison but his whereabouts are unknown; and in London Campion’s factotum Magersfontein Lugg and Metropolitan Police Commissioner Charlie Luke are interested in the whereabouts of master safe-blower Malkey Maud, now released from prison but disappeared like his cell-mate Haydon Bagley. And then Ivy Neale is found dead. Campion, by now in Yorkshire, finds himself drawn into the thick of village life and investigating the various mysteries.

I always preferred Albert Campion to other Golden Age aristocratic sleuths who seemed always rather too well aware of their social, moral and intellectual superiority to less elevated mortals. And I am delighted that Lugg is still with us: always ready to puncture any suspected pretensions by his employer: such a welcome contrast to the servile valets etc who devote themselves to those other sleuths. And Allingham’s gentle wit was always a pleasure: I have always wondered whether she was subtly mocking those other Golden Age writers. Mike Ripley’s Campion novels are worthy successors to her books while being fully aware of the societal changes that were taking place. And his deep knowledge of the North Yorkshire environment gives added depth to this particular title. Recommended.
------
Reviewer: Radmila May

Mike Ripley is the author of 21 novels including the award-winning 'Angel' series of comedy thrillers and one of the few authors to win the Crime Writers' Last Laugh Award twice. From 1989 to 2008 he was crime fiction critic for the Daily Telegraph and then the Birmingham Post, reviewing over 950 crime novels and co-edited three volumes of 'Fresh Blood' stories by new British writers, including Ian Rankin, Lee Child, Ken Bruen, Charlie Higson and Christopher Brookmyre. He was also a scriptwriter on the BBC's series "Lovejoy".
Professionally, he read history at university, trained as a journalist and went into public relations, working for the Brewers Society in London, promoting British beer and pubs, for 21 years. As part of his obligatory mid-life crisis, he gave up life in the big city and retrained as an archaeologist, working mostly on Romano-British sites in East Anglia.
At the age of 50 he had a stroke. He survived, recovered, wrote a book about it and served on the government's Stroke Strategy Committee which reported in 2009. He has produced festival performances with crime writers Colin Dexter and Minette Walters, as well as devising a Creative Crime Writing course for Cambridge University and the comedy panel game "I'm Sorry I Haven't A Cluedo" which was performed as the finale to the 2016 Crimefest convention in Bristol.  Currently he writes the monthly "Getting Away With Murder" column on www.shotsmag.co.uk and for The Guardian newspaper. He is the series editor of the Ostara Crime and Top Notch Thrillers imprints, rescuing and reviving crime novels and thrillers which do not deserve to be forgotten. He completed the third Albert Campion novel left unfinished on the death of Pip Youngman Carter (husband of Margery Allingham) in 1969. "Mr Campion's Farewell" was published in the UK and the US in 2014 and has continued the Campion series with "Mr Campion's Fox" (2015) and "Mr Campion's Fault" in 2016. He has also edited "Tales on the Off-Beat" - a collection of short stories by Youngman Carter and two volumes of "Callan Uncovered" by James Mitchell, creator of the legendary television series starring Edward Woodward.