‘A Cold Case in Amsterdam Central’ by Anja de Jager 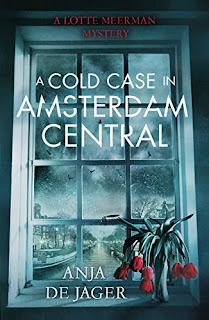 Lotte Meerman’s sleuthing habits began when she resolved to find Agnes Visser who mysteriously disappeared when they were both eight years old.  The young Lotte sought to be reunited with her childhood friend and at the same time hoped to entice her absent father, himself a detective, back home.  Her exploits, however, did not reunite her estranged parents and, although she eventually located her young friend, it was too late, the girl had already been murdered.  Now Lotte works as a police detective in Amsterdam but still feels guilt at having failed to prevent Agnes’s death.  During her previous case she sustained a gunshot wound to the shoulder and has just returned to duty after several months away from the job she loves.

The novel opens with Lotte carefully threading her way through shards of glass that surround the body of a painter and decorator, Frank Stempel, who has fallen to his death from the seventh floor of a building.  The scene becomes a perfect metaphor as Lotte realises she must also negotiate her way through the sharp and strained professional relationships that have greeted her return from sick leave.  Her former partner is scathing in his criticism of the way she handled her last case, and she finds herself fighting the rest of her department when she suggests that Stempel’s deadly fall may have sinister overtones.  A left-luggage ticket from the dead man’s jacket leads Stempel’s widow to make a grisly discovery at Amsterdam Central Railway Station and increases Lotte’s suspicion that she is dealing with a murder rather than an accident.  Dark secrets hidden for decades are exposed and more recent criminal puzzles are solved as Lotte pursues the case despite opposition from her peers and supervisory officer.

The first person narrative voice reveals Lotte’s complex and highly credible character wracked with self-doubt and anxiety.  The immediacy and intimacy of her voice is skilfully interspersed with a third person narrator and this dual perspective affords the reader a wider view of events than Lotte’s alone.  The two viewpoints give depth and colour to the story.

Similarly, Amsterdam’s familiar compact city centre, with its bustle and building work, contrasts with the more open landscape of the ingeniously reclaimed polder where Lotte believes, “I could see as far as I wanted, nothing interrupted my view…”.  But is Lotte really seeing clearly?  The polder, apparently secure within dikes and armed with pumping stations ready to combat any rise in water levels, can never be taken for granted; polders, like life, can never be risk-free.  The reader soon suspects that the clarity and peace of the polder beyond Amsterdam conceals tensions and murky events from the past.  Lotte’s instincts have, after all, been wrong before…

A Cold Case in Amsterdam Central is the second novel in Anja de Jager’s Lotte Meerman mysteries and I cannot wait to read the first, A Cold Death in Amsterdam, to see how this unusual, intriguing and engaging female detective made her debut.
------
Reviewer: Dorothy Marshall-Gent 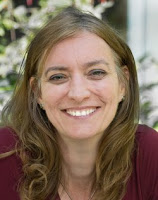 Anja de Jager is a London-based native Dutch speaker who writes in English. She draws inspiration from cases that her father, a retired police detective, worked on in the Netherlands.
Currently she is working on another Lotte Meerman novel, The Murder’s Guide to the Family, which Constable will publish in 2016.